Hebron resident and Scout leader Chuck Fink addressed the Hebron City Council earlier this month about the recycling center and the mess he’s faced with cleaning up each month. He circulated the photo shown inside this article to let the council know that things have gotten out of hand. “This is your walking trail,” he said during the meeting. “All of this trash is on your walking trail.”

Although the recycling center is considered a success, people continue to leave recyclables outside the trailers instead of waiting until the scouts are there to accept them. When the wind blows or it rains, he said, it’s a real mess. Fink said he spends hours at the center just cleaning up the mess created by the dumping, and though most of the items are indeed recyclable, other non-acceptable garbage is  finding its way into the dumpsters and around the trailers. “That’s illegal,” Fink said.

Councilman Robert Dodes wondered if the illegal dumping was simply that people didn’t understand what they could and couldn’t leave at the site. “It sounds more to me like ignorance of what can be left there as opposed to people just dumping trash so they don’t have to pay a garbage bill,” he said. Fink agreed restating most of the dumping was recyclable items.

Hebron Girl and Boy Scouts run the center every third Saturday of the month; the Boy Scouts collect newspapers while the Girl Scouts collect plastic, tin, aluminum and cardboard. They’ve been doing this for the last 20 years and we’ve been putting the “rules” of the center in the paper for as long. Frankly it’s a wonder to me that people don’t know what can be taken there or when they can take it. Every month we print what can and can’t be accepted, the time the center is open, and a special note stating not to leave items at the center when no one is there, to no avail apparently.

And that’s why Chuck asked the City to erect a sign at the recycling center making clear what and when items can be taken there. Since the council just approved backing to the Girl Scouts in August by giving them a raise as a reward for running such a beneficial center, their interest in keeping it neat and tidy down there warranted the sign. Now all they need is cooperation from local recyclers. 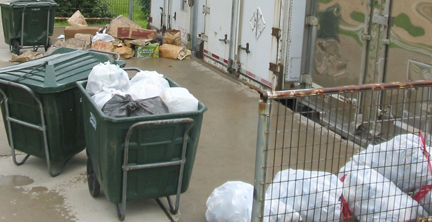