“I have authorized an emergency declaration. At this time the Nebraska Emergency Management Agency (NEMA) is in contact with other state agencies and they are actively monitoring the situation and will provide assistance as needed,” said Governor Ricketts in a news conference. “The good news is nobody was hurt and everybody is safe. Utility crews are out there working.”

There were two known tornadoes that impacted Thayer County on May 6, though Thayer County sheriff David Lee admits there could be some that spotters missed.

During the six o’clock hour, a tornado moving up from Kansas, missing Hebron, and instead veered east of town. The twister damaged a home south of Hebron, according to Bill McPherson, Thayer County Emergency Management director. Local volunteer firefighters assisted moving the occupants out. No injuries were reported.

A second tornado passed through Ruskin and Hardy and moved into the southwest rural part of the county between 4:45 and 5:15 p.m.

McPherson was first alerted of the possibility of severe storm early Wednesday afternoon.

“Beginning [that] afternoon at 12:09 p.m., I received an email from the National Weather Service that contained a briefing on the weather,” said McPherson. “They were calling for an enhanced probability risk of severe weather, which was somewhat more than we believed we were getting. Prior to that we were in a slight probability risk.”

Heavy rain and hail were reported with rain fall reaching around 12 inches for the county average, according to Lee.

Flooding occurred throughout the county, and quickly became a major issue.

“No one could get into Hebron the night of the storm,” said Lee. “There was a point where waters were so high we could not get to the hospital if we needed to.”

The aftermath of the storm was just as ugly as the storm itself.

“There were washed out bridges, road damage, county roads and lots of residents dealing with the clean out,” said Lee.

U.S. Highways 81 and 136 were both closed due to flooding but by Thursday afternoon, both were opened up.

The waters took out at least three bridges: one located on First Street in Hebron between the country club and Thayer County Health Services, another on River Road east of Hebron between Roads 6300 and 6400, and a third on Road K between Roads 5800 and 5900 that was a wooden bridge.

“These are just ones we know of,” said George Gerdes, Thayer County road superintendent. “A lot of times we find out more damage when the water goes down and dirt starts to settle. [It’s] nothing we can’t fix. It’s just going to take some time. The roads have to dry out so we can get dirt to repair them. We pretty much have all the roads passable other than ones with bridges out … there’s lots of silt and gravel in ditches that will take awhile to clean out. A big rain like that will make your little problems big. We’ve been running all over the county trying to cover everything and people have been calling in which is good.”

According to Lee, many farmers and cattlemen also have cows that are unaccounted for.

“It’s going to have a big impact on local ranchers,” said Lee.

Deshler, southwest of Hebron, was greatly impacted by flooding when Snake Creek and Spring Creek overflowed and cut off the south part of town across from the Thayer County Fairgrounds where Parkview Haven Nursing Home, Meadowlark Heights Assisted Living and Deshler Public Schools are located. Many homes were damaged as well. Forty-three residents of that area were evacuated to the school Wednesday night which was opened as a shelter, according to a NEMA report.

“A shelter trailer is located in Hebron; however, with extensive flooding, we were unable to get the trailer to Deshler,” said McPherson.

The Red Cross was scattered throughout the southeast part of the state, assisting those who had been displaced from their homes. Red Cross arrived in Hebron around 6:15 p.m. Wednesday evening.

With the flooding and closing of Highways 81 and 136, McPherson used AlertSense, an Emergency Notification System offering public warning, information and incident awareness, Thursday morning to contact Thayer County schools, the hospital and major businesses in areas of impending difficulties to travel.

Residents, road workers and many others are still working to get the county back on its feet. 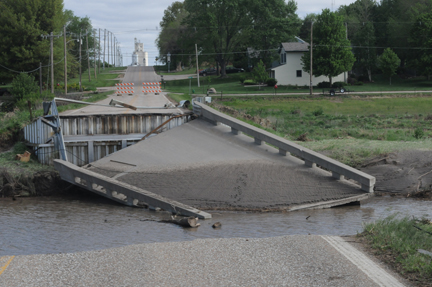 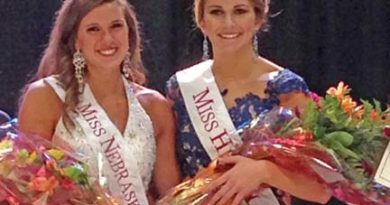