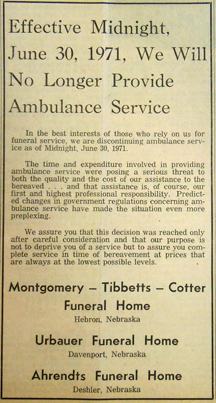 Thayer County Health Services paramedic Michael White is busy organizing the scheduling and maintenance of the county ambulance service. The additional responsibility comes to him after county commissioners and the ambulance and hospital boards declared Thayer County Ambulance dissolved. The service will now be governed by the hospital.

“This is a transport ambulance only and will not be used for emergency calls,” White said following the hospital board meeting a couple of weeks ago. “The unit will be purchased by the hospital, but the department will stand on its own merit.” The new name for the new department will be Thayer County Critical Care Transport, he added.

Almost to the date of its dissolution, Thayer County Ambulance was established 30 years ago, in August 1971, when funeral directors discontinued ambulance service to the local area. At the time of its establishment, a county ambulance board consisting of Rev. Paul Whitfield, H.E. Bice and LaVern Poppe was appointed by the commissioners to oversee the setting up, training and maintenance of the county-wide service.

Hebron Journal-Register – September 1, 1971: The need for the purchase of an ambulance and the establishment of a volunteer ambulance service precipitated when local funeral directors discontinued ambulance service in Thayer County July 1 of this year. Since then there has been a serious gap in the emergency medical service of Thayer County.

Very fine rescue units manned by volunteer fireman are operating at Alexandria, Bruning, Byron, Carleton, Chester, Davenport, Deshler and Hebron. But there is no provision made either for long distance trips, such as taking patients to Lincoln, nor for non-emergency transfer of patients from their home to the hospital or vice versa. The newly purchased ambulance will be used in these instances as well as cooperating with the presently existent rescue units whenever help is needed.

Turning the service over to the hospital is purely economical said current ambulance board president Dan Fink. “The number of calls didn’t warrant the cost of keeping it running. It’s just a matter of dollars and cents; we’ve been exploring different options for about two years.”

But with the hospital’s acquisition comes new rules for the ambulance, specifically the fact that it will not be used as back up for local volunteer departments since it will not be equipped to answer 911 calls. “The bad thing about this is that the City of Hebron will lose it’s back up since the ambulance will only be used for transportation purposes,” said Hebron Fire Chief B.J. Linton at a recent city council meeting. “It also means our coverage area will expand since we often back up the other departments in the county. It will probably mean more expense to us.”

Ironically, the five-member ambulance board consisting of all volunteer firemen will also be dissolved with the hospital’s acquisition.

“Since it will become a hospital department,” said TCHS CEO Joyce Beck, “the hospital board will oversee it just as they do all other departments in the hospital.” Beck said the hospital’s contract with the county for the newly established department is good for five years.

In a budget projection presented to the hospital board last month, Beck said operational and non-operational expenses for the ambulance would run $101,652 a year while operating revenue would bring in $110,676 annually for a net income of $9,024.
White said the current unit, a 2003 Ford with 40,000 miles is equipped with a new cot and ventilator and he would like to see an auto-pulse added. The difference between how the ambulance will now be equipped and how it was equipped determines its status, i.e., in a transportation vehicle, the patient has already been stabilized and less equipment and personnel are needed making the vehicle cheaper to operate.

The commissioners and hospital board agreed to the terms of the contract in August and the hospital will take over the ambulance October 1, 2011. 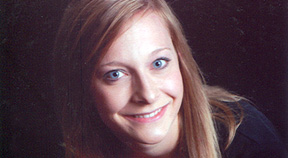 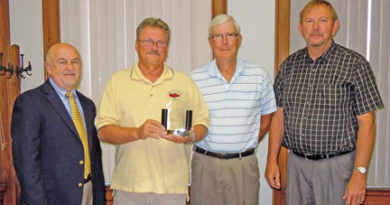 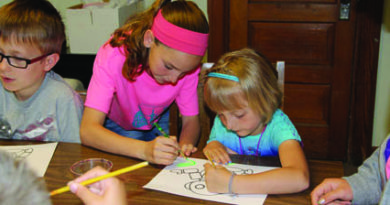