The Thayer County Livestock Feeders Association will hold its annual banquet and dance this week at the Thayer County Activity Center in Deshler. A meal, awards, dance and entertainment are on tap as the organization takes a look at what was accomplished in 2014.

During the annual meeting, new officers will be installed including new president Travis Sinn.

Sinn will be the second generation in his family to take the position and lead the Thayer County Livestock Feeders, the local affiliate of Nebraska Cattlemen.

This will be Travis’s seventh year as a director of the feeders group. The seventh year marks a member’s presidential year of the association.

According to the Nebraska Cattlemen’s website, the ideals of the organization is to create a climate that promotes profitability for the cattle industry, spread awareness of their product, have minimal government intervention, be good stewards of the land and maintain animal care and well being.

Thayer County Livestock Feeders is one of the biggest groups in the state.

“The group has given me a lot … The people are the best part,” said Sinn. “The directors are a good group of guys.”

As president, Travis summarizes his upcoming position as being responsible for “getting everything together and making it happen.”

One fond memory he has of being involved in the organization is a trip he took to Washington D.C. through Nebraska Cattlemen. He helped put on a beef 101 workshop for House and Senate agricultural aides. A representative from California, Travis remembers, was a vegan.

Sinn’s wife, Mandi, is also involved with Feeders. She decorates for banquets and planned this year’s Feeder trip to Texas.

Mandi, originally from Hebron, is not from a farming family, but, according to Travis, picked up on farm life quickly.

Travis has been farming for eight years now but is not unfamiliar to farm life. His grandfather moved to Thayer County in 1963 to farm and Travis’s father is also a farmer.

After graduating from Kansas State with a degree in secondary education, Travis taught chemistry and physics.

Once he and Mandi started having children, however, they chose to move back to the farm.

“I wanted to give my kids the same opportunities that I had growing up,” said Sinn.

The Sinn farm is located east of Chester and is owned by Travis’s father and two uncles.

Travis and Mandi live there with their three children Ashton, 10, Colter, 7, and Paisley, 2.

Sinn’s farm is truly family run as responsibilities are divided between Sinn, his father, his two uncles, his brother-in-law and a cousin.

“Everyone does what they’re best at,” said Sinn.

Even Mandi, Ashton and Colter help out.

The Feeders banquet will take place Saturday, Feb. 21, at the Thayer County Activity Center in Deshler. Then, Travis will be appointed the new president. 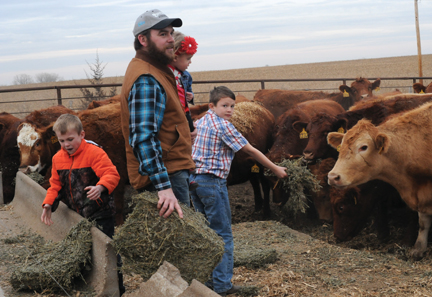 After 25 years, Burds to semi-retire