The investigation surrounding Abby Uecker’s death at the Thayer County Fairgrounds in the early morning hours of July 23 has been determined an accident.
Uecker, who was the lead singer in the Abby Nicole and County Road band that played at the fair hours before she died, was 25-years-old. Her music career was hailed as up and coming with her first single recorded in Nashville, Tenn.
Thayer County Dan Werner held a press conference Oct. 5 regarding the investigation in the district courtroom. He read from a press release before taking questions.
He said on the evening of July 22, Uecker and her band had performed on stage outside the grandstand following the races. They finished shortly after 1 a.m. and fair board members remained to close. Most had left by 2:30 a.m., but one fair board member stayed.
Around 4:15 a.m., Jason Lienemann, a member of the pit crew from the previous evening’s races and two other pit crew members, plus a band member and Uecker, were in a UTV on loan to the fair board. Lienemann was the driver. Lienemann and the other members of the pit crews were from North Platte.
“It is unclear how access to the UTV was obtained,” Werner said. Later, he said he didn’t think it was the security guard’s job to “police” the UTV.
Uecker was sitting on the passenger’s lap. A total of five people were in the UTV.
After a couple of laps, someone’s hat blew off. Lienemann drove around looking for the hat and turned left toward the inside of the track. At that point, the UTV tipped over on its side, pinning Uecker beneath the roll bar.
“The uneven distribution of the weight of the passengers in the UTV and the slope of the track at the point where the turn was made may have contributed to the accident,” Werner read from the press release. “There may have been other factors causing the UTV to tip over.”
The security guard noticed the UTV had tipped and went directly to the scene, subsequently calling 911. Lienemann and others lifted the UTV off Uecker and the band member tried to comfort her.
Deshler rescue was dispatched and responded immediately, Werner said.
Uecker was prounced deceased at 5:38 a.m., from severe blunt force head trauma as a result of the UTV accident.
Werner then met with the doctor and encouraged a police officer to go to the fairgrounds sometime after 6 a.m.
Before 7 a.m., Lienemann and the pit crew members left the scene for North Platte.
“We couldn’t get the alcohol chemical test. There was a delay in the investigation and although they stayed there, they were not contacted,” Werner said of Lienemann and the others. “We don’t have the facts to support motor vehicle homicide. I can’t come up with an alcohol level.”
He said he wanted to give the family closure.
“I actually wanted to prosecute,” he said.
The Nebraska State Patrol had contact with the driver at approximately 4 p.m.
Werner explained Lienemann told officers he had five to six beers during the races and one beer at Uecker’s performance.
If Lienemann’s statement about how much he had to drink was true, he wouldn’t have had alcohol in his system at the time Uecker died, Werner said.
“His statement was not inconsistent with other people’s statements,” Werner said. “I have to go on the facts that have been presented.”
Werner also explained reckless and willful reckless driving did not apply to the accident because that would mean the driver had a criminal intent.
He asked more than once reporters not contact the Uecker family.
David Domina, the Uecker family attorney said the family fully respected and understood Werner’s decision not to proceed with a criminal prosecution.
“As we have discussed, the circumstances of Abby’s death may be best dealt within a context that does not involve criminal prosecution,” Domina stated.
He added he appreciated Werner’s efforts. 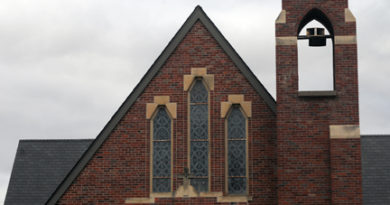 School Board prepares for public meetings