Ten veterans were honored during the Veterans Day ceremony at Thayer Central High School.
One by one, the veterans were named as students displayed their respective Quilts of Valor, a national project meant to cover veterans in love and gratitude.
The veterans were:
Dwight Pumphrey — He enlisted in the US Army Aug. 14, 1942 was honorably discharged Feb. 13, 1946 from Fort Leavenworth, Kan. He continued his service in the Army Reserves. Pumphery retired from the Reserves as a major June 13, 1979.  He received the Bronze Star and European-African-Middle Eastern Service medal.
Ivan Ayers — He enlisted in the US Army April 6, 1951 and was honorably discharged in Breckenridge, Ky., March 27, 1953. He received the Army of Occupation medal.
Kenneth Eggers — He was in the US Navy from June 5, 1951 until June 24, 1955. He then entered the Naval Reserves. Eggers was the recipient of seven medals, Good Conduct, Korean Service, Korean Presidential Unit Citation, United Nations Service, China Service, Navy Occupation Service and National Defense Service.
Dale Johnson — Johnson’s military records could not be located. Daughter Deb Pope said her father thinks he enlisted in October of 1951. He was stationed at Mather Field, Sacramento, Calif. He was most likely a staff sergeant in the Air Force during the Korean War. Johnson was honorable discharged May 21, 1955.
Wilfred Mussman — He was inducted into the US Army Jan. 29, 1953 and was honorably discharged from Fort Carson, Colo., Dec. 24, 1954 as a sergeant. He entered the Army Reserves and served for another eight years. Mussman was presented with the United Nations Service medal, National Defense Service medal, Korean Service medal, Good Conduct and Overseas Bar.
Robert Bacon — He enlisted in the US Marine Corps Feb. 21, 1952. He was stationed at Barstow, Calif and was honorably discharged Feb. 20, 1954. He moved on to finish his education at Peru State College and received his teaching and coaching certificate, educating for 35 years with 25 of those years at Hebron High School.
The sixth grade class of 2023 honored Bacon for his contributions to country and education.
Lawrence Traudt — He entered active duty May 8, 1953 and was honorably discharged April 23, 1955 from Fort Carson, Colo., as a corporal. To complete his eight-year committment, Traudt entered the Military Reserve. He received the Good Conduct and National Defense Service medals.
Roger Retzlaff — Retzlaff went into the US Army May 15, 1969 and after being honorably discharged, he served in the Reserves until May 14, 1975. He received eight medals, National Defense Service, M-16 Marksmanship, Sharp Shooter, Vietnam Service, Vietnam Campaign, Combat Infantry Bridge, Army Commendation and Overseas Service.
Kathryn Retzlaff entered the US Army Quarter Master Service July 5, 1968. She was discharged Feb. 5, 1972. Kathryn then entered the Army Reserves. She was ordered back to active duty in support of Operation Iraqi Freedom from Aug. 20, 2004 to Oct. 11, 2005. A partial listing of her awards include the Meritorious Service, Joint Service Commendation, U.S. Army Commendation (third time), U.S. Army Achievement, U.S.A. Good Conduct, Army Reserve Component Achievement, National Defense Service, Vietnam Service, Republic of Vietnam Gallantry Cross Unit Citation, Armed Forces Reserve, non-commissioned officer and professional development award, Armed Forces Reserve medal with Mobilization Apparatus, Army Service ribbon and Global War on Terror Service.
Shawn Winans — He entered the US Army Aug. 24, 2000. He was a tanker with the 1st Infantry Division, 2nd Battalion, 34 Armored Regiment and later moved to 1st Battalion, 34 Armored Regiment, where he volunteered for Operation Iraqi Freedom. He landed in Kuwait Sept. 9, 2004. While on patrol, the Humvee he was riding in came into contact with an improvised explosive device.
Winans was medically discharged and received a number of awards, Purple Heart, Army Commendation, Army Achievement, Army Good Conduct, National Defense Non Commissioned Officer’s Professional Development ribbon, Army Service ribbon, Driver and Mechanic Badge with Driver T bar and Driver and Mechanic Badge with Driver W bar.
The Quilts of Valor were made by 4-H quilters, Ro Bratton for Pumphery, Kathy Retzlaff for Roger Retzlaff, Traudt’s daughter and sixth grade students for Bacon.
Also honored was teacher Anne Heitmann by Superintendent Drew Harris.
She was called to the stage and honored as the 2015-2016 American Legion Middle School Teacher of the Year.
In 2014, Heitmann was part of local fundraising for the Korean War Veterans Honor Flight to Washington D.C. That effort raised $4,200.
Heitmann again helped with fundraising for the Vietnam War Combat Veterans Honor Flight, calling the project Operation Airlift 2.0.
Students were fully engaged in the project and raised over $8,000 and paid for nine veterans to participate in the flight.
Veterans and students were featured on 10/11’s Lance’s Journal and the project received many letters from veterans who attended the flight event.
Heitmann was nominated for Middle School Teacher of the Year by Glenn Fischer and the Hebron American Legion Post 180. The State Legion selected Heitmann out of a pool of Nebraska teachers. 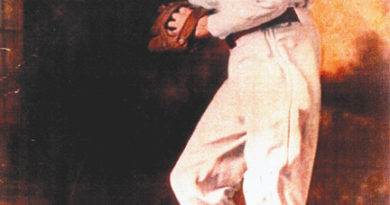