In June of 1940, Hebron business men were working “on their toes,” to implement requirements they needed for an airport and ground school to train civilian pilots.
The state’s aeronautics commission had approved a level location on a 160 acres belonging to the Zutters. Mrs. Zutter lived in Chicago and sent her signed, five-year lease of the land via U.S. air mail, and Hebron businessmen took on $200 to $300 of the expense after crop revenue was included.
Tenant E.L. Wehrbein cut the grain for three runways — one northeast to southwest; another northwest to southeast; and the third, north to south. Each runway was approximately 2,100 feet long.
Sam Stull was the flight operator and Professor Hofstad was the instructor for the ground school, which consisted of two hours on aviation history; 12 hours for civil air regulations; 15 hours each on navigation, meteorology, aircraft and the theory of flight; five for engines and instruments; two hours for radio uses and forms; and one hour for parachute training.
The airport has evolved since it was established in 1942. In 1965, the Hebron Flying Club was incorporated by Dr. Louis Bunting, M.L. Christensen, Ray Mieth and Jack Stewart. Ted Tietjen of Byron was one of the original members. Others who joined were Harley Grone of Davenport and Dr. R.E. Penry and Dr. John Butler of Hebron.
The purpose of the club was to promote flying in Hebron, and it owned a 1965 Cessna 150 aircraft for use by its members.
Around 1970, Marlowe Huber began spending time at the airport. He refers to Mieth as “Mr. Airport.”
“He pushed snow and emptied wastebaskets. He was doing everything except overhauling planes,” Huber said.
Huber said he was never into golfing and after he retired from the mail route in 1993, he didn’t have much else to do, but hang out at the airport.
“An ‘airport bum,’ they called me,” he said. At age 90, Huber still flies.
Early mornings are best, he said.
“The public thinks flying on sunny days are nice, but there are air currents,” he said. “The hotter the day, the worse it is.”
He gained his license to fly in 1970 and has had the privilege to witness the airport’s transformation over the years.
“Most noticeable to me is the advent of modern technology, plus the many changes in the physical layout of the overall airport,” he said.
Speaking of technology, an open house and ribbon cutting will be held at the KHJH Hebron Municipal Airport Oct. 9, to celebrate recent additions of a fuel tank project and newly laid concrete on the taxiways, and the airport’s economic contributions to the area.
Dignitaries scheduled to attend the ribbon cutting at 4:30 p.m., are Lt. Governor Mike Foley, Sen. Laura Ebke, and Nebraska Department of Transportation Aeronautics Division representatives Ronnie Mitchell, Anna Lannin and David Morris.
The day begins at 9 a.m., with tours for the public, which will include educational displays, aircraft and career information.
At 10:30 a.m.; 12:45 p.m.; and 1:30 p.m., the Norris Hi-Line Electrical demonstration will take place.
In the afternoon, a mock emergency drill with helicopter transport for the “victims” is planned to begin at 2:15 p.m., with the Hebron Fire Department. RotorWings Aviation pilot, Kevin Mitchell, will be assisting.
After the ribbon cutting, structural engineering firm, Kirkham Michael, will sponsor a free hamburger meal. The Hebron Rotary Club will serve the meal.
Overseeing the airport’s accounting and administrative work, Deb Craig said the event began as a ribbon cutting for the $250,000 grant fuel tank project and a $750,000 grant to complete the taxiways project.
“It turned into an open house and all-day event,” she said. “One thing we’ve been hearing is pilots are needed in all areas.”
The open house could be an opportunity to renew interest in the field of aviation. Students will be touring the facility, where they will hear from experienced drone operators and pilots. Norder Supply will give a presentation on anhydrous safety.
Huber gave a brief history of the airport.
Planes landed on grass runways in the 1950s, he said.
In 1992, a new 3500-square foot terminal building was constructed with a 60-foot cement runway. New lights were installed and an automatic weather observation system was implemented.
A new building, along with a tractor and snow removal equipment were added in 2005.
Trees around the airport were removed in 2012.
Names that come to mind for Huber are Meith, Clarance McGhyghy, Lavon Bohling, Albert Muehling, Dean Osher, Johnson, O’Neal, Penry, Bunting and Dr. Butler, the Kenners, Duane Vorderstrasse and current president, Bill Linton.
“I was privileged to serve as secretary/treasurer for the authority for some 18 years,” he said.
Huber has served the airport authority for 25 years. He will be honored Oct. 9 for his service.
Current board members are president, Linton; vice president, Jay Huhman;  secretary/treasurer, Cory Clark; and members, Huber and Joe Hergott, Sr.
Craig also spoke of the airport’s changes through the years, citing its businesses, the state patrol’s regional office and  future services of Ozsome Possibilities Counseling.
It seems the Hebron Airport is still “a busy place,” as described by the Hebron Journal-Register in an aging article on Johnson’s Flying Service.
“A strong airport is important to everyone in the community. It benefits those who don’t fly as well as those who do,” Johnson said.

Deshler in second round of funding to rehabilitate homes 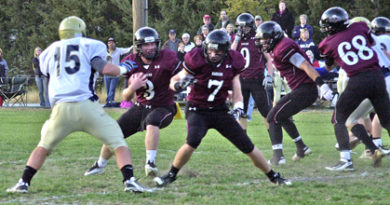