Dustin and Lance Powers, both formerly of Hebron, appeared in district court Thursday; Dustin for an arraignment and Lance for a sentencing. The brothers’ cases are unrelated.

Dustin Powers, 30, appearing in a Jefferson County jail jumpsuit, entered a not guilty plea to felony burglary and theft charges and distribution of a controlled substance  Thursday morning. Powers is alleged to have broken into Priefert Pharmacy in Hebron on Sept. 28, 2009 where he took $1,500 in merchandise. He is also accused of selling 449 lorazepam to an undercover agent in February of 2010.

Powers, through his attorney Ronald R. Brackle, asked District Judge Vicky Johnson for a bond reduction which was newly set at 10,000/10 percent. He is scheduled for a pretrial Nov. 3, at 9:45 a.m.

Powers also appeared Thursday afternoon in Jefferson County district court for an arraignment on two charges of felony distribution; incidents which were alleged to have occurred on Dec. 17, 2009 and March 29, 2010.

In Jefferson County he was also given a bond reduction; 10,000/10 percent and scheduled there for a pretrial on Nov. 3 as well.

Lance Powers, 22, appeared Thursday morning for sentencing on a burglary charge, but was allowed one more month after Judge Johnson continued the sentencing to Oct. 6.

Powers is accused of entering Tillie’s Bar and Grill in Byron in July 2010, and taking cigarettes valued at $293.60.

He was supposed to be sentenced in August, but due to a misunderstanding in communication, Powers failed to contact a probation officer during the presentence time. Judge Johnson allowed Powers extra time to make contact which he did.

In his appearance Thursday morning, Judge Johnson again continued his sentencing until next month after discovering his fiancee is due to have a baby at any time. 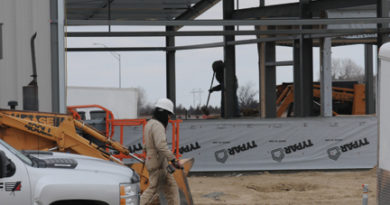