The City Council paid a visit to the Frank Callaway property during its regular monthly meeting Monday night. The property, covering  a two-block area between 4th and 6th streets in south Hebron, was deemed a nuisance last month after the City received complaints from a neighbor.

In July the Council asked for a hearing with Callaway, but he requested more time. City leaders sent a letter to him stating if they saw some sort of improvement or that an attempt was being made to clean the place up, they would likely grant him extra time.

In a special meeting July 19, board members discovered there had been some removal of equipment on the property, but were convinced it belonged to someone else and that Callaway had not done anything. The council decided at that time to investigate clean-up costs and what it would take for the City to perform the task.

Monday night, Callaway attended the council meeting with his attorney, Jim McKernan, and granted permission to city leaders to view the property.

In July, the council felt if he cleaned up old vehicles, dilapidated machinery, overgrown foliage and noxious weeds, it would show good faith, and after viewing the property and returning to the meeting, council members said he had done just that.

“It was a very insightful trip,” said Fangmeier, “it does appear you have made some effort to clean it up, but it is still an attractive nuisance and more needs to be done. It looks like a monumental task.” An attractive nuisance is one that attracts youth, animals or vandals.

Callaway said he was currently making arrangements to either destroy or burn the house sometime this month and was in the process of removing tires, pallets, foliage and trash. He has also installed a fence and more “no trespassing” signs.

Council members granted Callaway 90 days to finish the clean up. 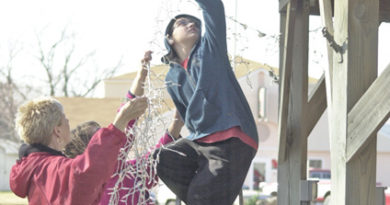 Volunteers give time to decorate 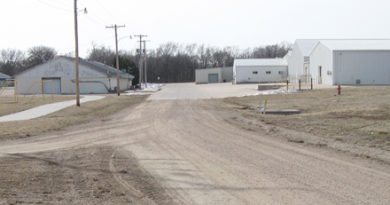