UPDATE: There will be a three-way playoff in the Class C Senior Legion State Baseball Tournament tonight (Wednesday, July 30). Sutton waited until the end of the game to string enough hits together for a couple of runs beating Shelton-Gibbon 4-3 in the late game Tuesday. Looking at tonight’s bracket, Hebron will face Sutton at 5:30 p.m., and the winner of that match will take on Shelton-Gibbon at 8 p.m.

UPDATE: An eighth inning finish told the tale as Hebron took on Pender in the first of two contests played Tuesday night in the 2014 Class C Senior Legion State Baseball Tournament played at the Hebron Sports Complex. For most of the game, Hebron lagged behind the Pender team until late in the sixth when the hosting squad finally tied the score at 5-5.

Both teams laid down in the seventh forcing the game into the extra final inning. There, Hebron loaded the bases and scored the winning run off of a Pender error at shortstop.

Hebron’s Ben Hintz collected two hits and Adam Meyer came through with a base hit. Hebron’s next contest will be Wednesday night.

Find lots of photos from the season by clicking on the photos prompt at the top of this page.

Eight teams including Creighton, Crofton, Hebron, Malcolm, Pender Shelton-Gibbon, Sutton, and Wymore round out the bracket; as of Tuesday morning, Crofton, Malcolm, Wymore and Creighton were done.

In Hebron’s third contest of the series Monday night against Shelton-Gibbon, the team held on through five innings before entering what became for them, the doomsday sixth. Prior to that, the game traded leads three times exciting a packed stadium at the park.

Shelton-Gibbon started the scoring frenzy with three runs in the second before Hebron went ahead, 4-3,  in the fourth. Shelton-Gibbon took the lead again in the fifth, 5-4, but Hebron was able to score another run to knot the game going into the sixth.

Hebron’s Caleb Goedeken took the loss going five and a third innings and striking out ten batters. Preston Brinegar had two doubles and drove in two runs for Hebron.

Results for Hebron’s Tuesday evening game will appear in the August 6 issue of the Hebron Journal-Register. In the meantime, play by play action and results can be found at nelegionbaseball.com.

The Hebron squad started its run in the tournament early by downing Sutton 6-0 in its first contest. It was the final game of the first round of games on a sultry Saturday night. Wymore, Shelton/Gibbon and Creighton had already advanced earlier in the day.

Out of the gate, Hebron scored four runs in the first inning, collected another in the third and finished out with a run in the sixth. Caleb Goedeken and Ben Baden combined for the no-hitter; Goedeken striking out seven for the win and Baden striking out two as relief.
Patrick Dempsey took the loss for Sutton.

Hebron’s second game in the series turned into a thriller that went nine innings before the squad could put away Creighton, 3-2. Hebron’s winning run came in the final stanza when Junior Reed hit a grounder to the shortstop that gets bobbled.

Preston Brinegar collected the win with seven strikeouts and giving up only four hits. Creighton’s Kory Wagner struck out four batters and gave up seven hits on the loss. 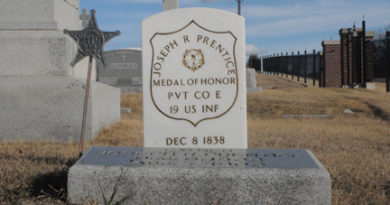 Ten Things That Leaders Should Say