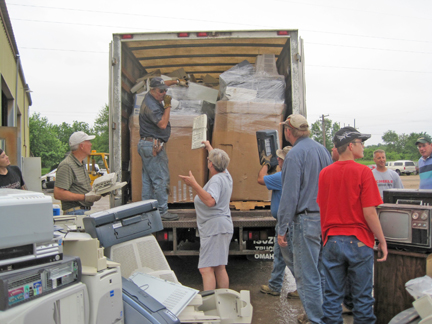 The event is made possible by a DEQ (Department of Environmental Quality) grant and is held in conjunction with Trailblazer, Little Blue NRD, TCEDA (Thayer County Economic Development Alliance) and Boy Scout troop 333.

“We lost our coordinators for our recycling events when the government shut down the RC&Ds,” said TCEDA director Arlis Hohl. “But the Trailblazer organization still has a board.” Hohl said its members are appointed by commissioners from each of the seven-county area and the board intends to continue with the annual recycling programs.

On Wednesday, the county leaders approved four village contracts with local law enforcement including Bruning, Davenport, Deshler and Hebron. The payment, which is based on man-hours, allows the county police to enforce city ordinances as well as add additional patrol hours above the standard county hours.
Bruning and Davenport pay $950 a month for the extra amenities while Deshler pays $2,520 and Hebron pays $11,796.

In other business earlier this month, the commissioners approved $7,010 to the area wildlife management; the price is average in comparison to surrounding counties. Fillmore and Clay counties spend approximately $7,000 for the wildlife service Adams spends around $9,000 and Hamilton spends $5,000. The request from Thayer County was identical to last year, said wildlife specialist Spencer Nelsen.

In his annual report to the commissioners, Nelsen said coyotes are a real problem in Thayer County and he spends the majority of his time here trying to control their movement.

“A dominate pair – a male and a female – work together, so we need to remove the dominate pairs to clear an area,” he explained. “But if we remove one pair, another pair close by will likely move in. The coyotes are very healthy in Thayer County and very numerous.” He said he has seen no mange or other diseases on the animals and he thinks on average they are bigger than they were ten years ago.

Nelsen said the management service tries to stay low-key in removing the animals. “We don’t want to go in and across the board, kill coyotes,” he said. “We try to take the minimum number of animals to solve a problem.”

Nelsen said there are so many badgers and skunks that he can only take the time to address the serious calls such as a badger under a propane tank. And snapping turtles are prolific, he said. 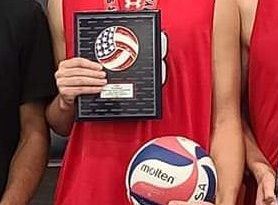