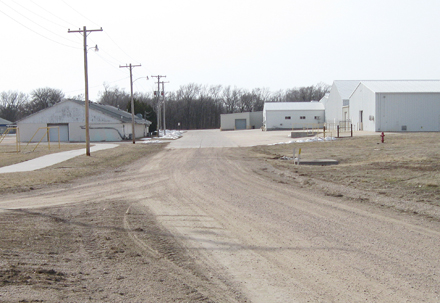 City leaders assured Dave and Janelle Farnstrom this week that they would do everything in their power to assist them in making the former “cheese plant” USDA (United States Department of Agriculture) compliant which means blocking public access to the property. Holdrege Avenue would be blocked at both the east and west borders of the property; the street runs from South Avenue to Seventh Street through the Farnstrom property which includes the former cheese plant and old Legion Club.

Blocking Holdrege at the property line would not affect entry to the old Legion Club parking lot which can be accessed from Euclid Avenue.

In a special council meeting, Feb. 28, Dave Farnstrom explained that the facility known as the “cheese plant” is being marketed as a food facility, but in order to meet USDA guidelines the public would not be allowed to enter the property. Blocking the property means fencing and gates, Farnstrom said, including a fence that would  run along the property line on Seventh Street closing access to an existing sidewalk. “We’re willing to work with the city on this,” Farnstrom said. “That’s why we’re here.”

Public access to the Sports Complex then became a concern for council members who considered extending Euclid Avenue from its dead-end point to the CC Camp (Riverside Park) entry.

Currently, Euclid Avenue runs between the swimming pool and  ball diamonds at the Complex ending at the old Legion Club parking lot. The public often uses the parking lot to access Holdrege Avenue since Euclid dead ends, but with the proposed fencing, Holdrege will not be accessible from the parking lot or vice versa. The Farnstroms own the parking lot as well, but allow the City to use it for sports and special events. 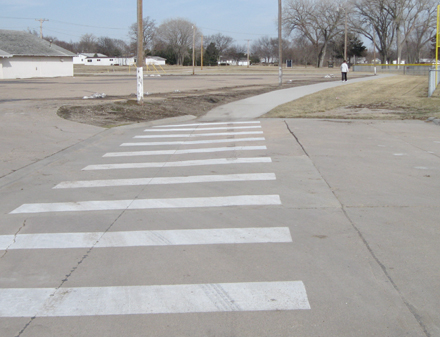 “If we try to extend Euclid Avenue to the camp, it would mean moving the trail,” said council member and trail project overseer Beth Goldhammer. “And because of the grant parameters, I’m not sure we can do that.”
Discussion of whether the City needed a through street or not at the Complex  then led to a field trip to the area during the Feb. 28 meeting. At the March 7 meeting, the council decided against the road extension after Goldhammer discovered the City could not take up the trail or abandon it without refunding the grant.

Council member Kurk Wiedel wondered if the trail could be moved to the side ten feet or so to make way for the road, but concern for foot traffic intermixed with vehicle traffic as well as the cost of building a new road ended the discussion.

As for closing Holdrege, the City said in a letter of commitment to the Farnstroms, that they had no problem “abandoning the easement for public access filed in Book A-15 of the Miscellaneous Records, page 90, of the County Clerk of Thayer County, on January 12, 2001,” as long as they had access to utilities located there. The City of Hebron is retaining a permanent easement for the purpose of “keeping, replacing, maintaining and repairing existing public utilities, including sewer and water.”

According to the agreement, the City’s commitment will be “effective and binding upon the execution of a contract for the sale and purchase of the “cheese plant” to a company licensed or approved by the USDA.”

As of Monday night, council members are considering and discussing other changes which may occur at the Complex, such as more parking and improved access to the campground and ball diamonds from Jefferson Ave.

Council chomps down on vicious dogs