The BDS Eagles have been moving up the ranks in the Class D1 Playoffs.

Last Tuesday night, the squad played against the Heartland Huskies on a cold field in Henderson.

The Eagles were victorious against the number two seeded Huskies with a 24-20 win.

“BDS Eagle’s will to win on a cold, blustery night was prevalent in our game versus an outstanding Heartland team,” said Scott Shipley, co-head coach. “The team found ways to bring home an emotional win.”

Eagle scoring came when Grant Norder rushed for two touchdowns, when Norder made a 22 yard pass to Kale Kleinschmidt and when TJ Krupicka caught a 47 yard pass from Norder in the third quarter.
On the last play, Ben Elznic made an interception on a pass attempt by the Huskies, sealing the Eagle’s victory.

All together, the squad amassed 302 yards in the first seven downs, 34 rushes over 167 yards and 135 yards passing.

On Monday evening, the Eagles battled against Guardian Angels Central Catholic in the semifinals on their home turf of Bruning.

The game kept audiences at the edges of their seats up until the last seconds of the clock.To take the win, Rohr caught an 11 yard touchdown pass with 43 seconds left in the game, making the final score 44-40.

Scoring also came when Norder rushed for three touchdowns, Kleinschmidt and Elznic each caught a touchdown pass, Tegtmeier rushed and caught a PAT and Krupicka caught a PAT.

The Eagles will face Hemingford at 2:45 p.m. on Monday, Nov. 24, at the UNL Memorial Stadium in Lincoln for the state finals. 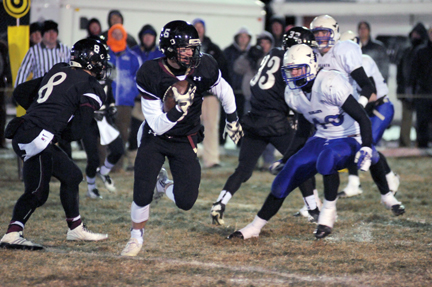