Hebron Fire and Rescue along with the Thayer County Sheriff’s Office responded to two fires and an injury accident this past week.

According to Thayer County Sheriff David Lee, on Friday, Nov. 15, Gilead Volunteer Fire responded to a house fire at 840 Highway 136 in Gilead. Hebron Fire and Rescue also responded for mutual aid. The fire occurred at 3:25 a.m.

The house is a rental but the two tenants in the home were James Goer and Kelly Cullum. Both were able to escape the house without serious injuries. The tenants were put in a motel for the night and the American Red Cross responded with aid.

The Nebraska State Fire Marshal’s Office is assisting with the investigation of the fire. At this time, it is believed that the fire may have been caused by an electrical source, but this has not yet been confirmed.

The house had mainly smoke and water damage.

The following evening, an accident involving a semi and a car took place at the intersection of Highway 81 and Highway 136 on Nov. 16 around 7:05 p.m.

Carol Patton of Junction City, Ohio, was west bound on Highway 136  in a 2012 Toyota Avenger. She came to a complete stop at the stop sign at the Highway 81 intersection. She then pulled out in front of a 2007 Peterbilt truck with a trailer being driven by Dwight Manson of Louisburg, Kan. Manson was northbound on Highway 81. Manson’s semi struck Patton’s vehicle on the driver’s side. Manson was carrying liquid butane in the trailer.The trailer tipped following the contact between the vehicles but did not roll.

Both drivers were transported by Hebron Fire and Rescue to Thayer County Health Services for minor injuries. There were no passengers in either vehicle.

On Monday, Nov. 18, at 8 a.m., Hebron Fire and Rescue responded to a car on fire at the alternative school parking lot. The driver went inside the building and when he returned he found flames underneath the dash.

Although not yet confirmed, the fire was believed to be caused by something electrical. 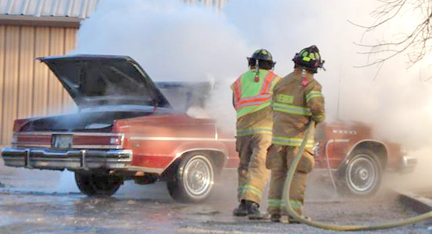