Over 20 people filled city hall on Sept. 17 for a special meeting called in response to the city council’s decision to turn down a proposed ordinance that would not allow body art establishments in the city of Hebron.

“We should remember that this issue is near and dear to both sides of the argument,” said Mayor Shane Day to start off the meeting.

Several of the attendees came to voice their concerns over the council’s decision.

“This is not about people with or without tattoos,” said Judy Walters who did not support the council’s decision. “This is not about a personal attack against a certain type of business. This is about due process.”

Walters stated that she felt due process was not followed and wanted the opportunity to  state her concerns before the city council.

“We respectfully request that the council take a re-vote based on proper due process and in the future work together as a team with the citizens to make this community a place we can be proud of and leave to our children,” said Walters.

The council responded that notices were posted the Friday before the previous council meeting at the city office, the bank and post office.

Other citizens in attendance also expressed other concerns.

“Why is the city council deciding what type of businesses should be allowed?” said Michele Modlin who owns the Bottle Shop in Hebron. “There is a business that wants to fill up one of our empty store fronts. I prefer to have people come here rather than Omaha or Lincoln to do their business.”

“We have so many empty businesses and the idea that you can get a group of people in town together and decide who we will allow in or who we will allow to succeed scares me,” said Sam Mills. “We shouldn’t have the chosen few say ‘we don’t want people like you in our town.’”

“We did have a community survey done that we looked specifically at ‘what does this community need?’ said council member Kurk Wiedel, who voted for the ordinance in the previous meeting.

“We talked about restaurants, hotels and additional businesses but not once was a tattoo parlor ever brought up within that discussion.”

For some, the issue brought back memories of the recent school bond issue.

“It tears me apart that we’re polarizing our community once again,” said Steve Anderson, owner of the Central Market. “I don’t want to tear our community apart. We’re just now starting to heal after the last battlefield.”

The city council used the meeting as an opportunity to remind citizens to get involved in government process.

“This is a good lesson for all of us,” said  Wiedel. “Our history teachers told us we have to get involved in the processes of our government because they are ultimately defining the rules by which we go.”

At the end of the meeting, a motion was made by Wiedel to suspend the rules but the motion was not passed.

The council chose to stand by its original decision to allow body art establishments in the city of Hebron.

“We have to have the credibility once we’ve decided something not to inverse ourselves,” said council member Larry Fangmeier. 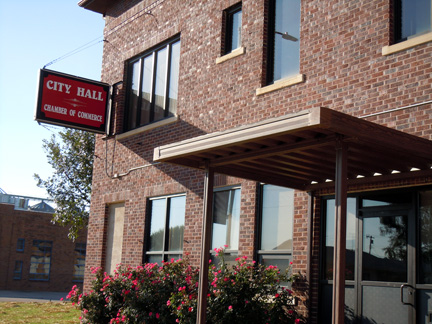