By Ally Phillips, Nebraska News Service
LINCOLN–Not everyone is a bridge inspector, but motorists can contribute to Nebraska bridge safety.
First, drivers shouldn’t hesitate to call the Nebraska Department of Roads and let an official know if they notice anything such as a crack in the concrete, steel popping out or noticeable corrosion.
“I would be surprised if that would be reported about and our district didn’t already know about it,” Mark Traynowicz, Nebraska state engineer, said. “But it’s always good to call.”
Daniel Linzell, University of Nebraska-Lincoln’s civil engineering department chairman, said all of the media attention on bridge conditions is a way to help bring better awareness of the state of bridges.
“I think the hype and attention that is paid to this is needed and I hope that it will lead to some smart people, people who are smarter than me, getting together on both the political side and the tactical side and then on the user side to determine how we are going to maintain it, because obviously we need it,” Linzell said.
When it comes to local bridges, Larry Dix, Nebraska Association of County Officials executive director, said one of the best ways for people to help is to obey posted weight limits and stop driving heavy equipment over bridges that might not be able to handle the weight.
Dix said that increased corn production leads to larger truckloads at harvest time being driven across bridges that aren’t classified for their weight.
“What that does is tell someone that you’re going to have to drive an extra 5 or 7 miles,” Dix said, “and they’re saying ‘well if I can just drive across the bridge, I’m to where I need to be.’ And it’s very close, so it’s a very tough decision on (the driver’s) part because they think ‘I’ll drive across it since I drove across it before and it didn’t collapse so I’ll take the chances again.’ And they do.”
Contact Ally Phillips at nns.aphillips@gmail.com 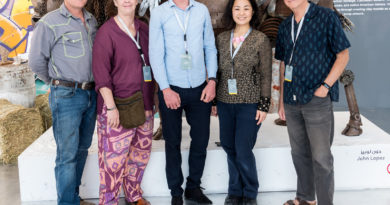 Multi-media is in Chinn’s hands