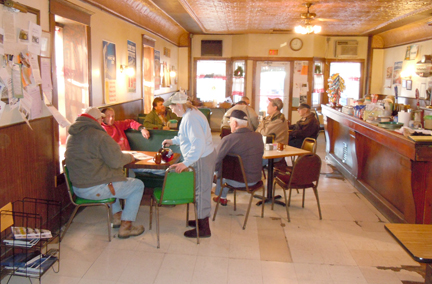 Karen Keilwitz’s eyes well up as she talks about her Gilead community; a community with mighty long arms as it turns out. “We’ve received donations from as far away as Texas,” she says while wiping her eyes. “People who used to live here have donated money, time and labor; people who live here now are doing the same.” So far she says the inn has received about $9,000 in donations, a figure she quotes in awe.

The Pioneers Inn, a limestone inn built for railroad workers 125 years ago, sits alone on the main street of Gilead. It is the village’s only  remaining downtown business. And last fall, Keilwitz and her husband Lyle, who have owned the bar/cafe since 1986, faced closing its doors.

“Everything was going wrong,” Keilwitz said. “The coolers were in bad shape, the floor needed replacing, the roof over the front entrance is full of holes, and the furnace is old.” The couple said they didn’t have the  money to fix up the place enough to keep it open, so they laid out a letter on the bar last fall explaining that they would be closing the doors.

“We couldn’t have that,” said regular patron and Gilead resident Marjure Coordsen over a cup of coffee at the Pioneers Inn last week. “We drink coffee here, we hold birthday parties here, and when I’m away and can’t fix lunch for the guys, they come here to eat.”

Coordsen enlisted the help of fellow coffee drinker and Gilead resident Alvina Krueger and the two coordinated a 20-person committee and public meeting. “We wanted to see if people were interested in keeping the place open,” Coordsen said, while Krueger added that the inn is the only place in Gilead for people to meet. It’s the only place for clubs to get together, where UPS drops packages, where the 35 or so residents purchase stamps when the post office is closed. It’s where Santa Claus makes his annual appearance and the local Easter Egg hunt gets its start.

And its where the cafe’s patrons came up with an idea to raise money to keep the place open.

“Anyone can purchase floor tiles for $25 each,” Keilwitz said adding that the tiles can be purchased in honor of someone or in the memory of anyone. The money goes into the Pioneers Inn Building Fund.

Keilwitz said some of the donations have been used to fix a drafty storage room in the back. “Over Christmas we studded out the cement block walls, insulated, put up plywood and painted the storage room,” she said and added that she’s found a couple of used coolers in really good shape to replace the old ones in the cafe.

The next order of business is the floor. “It’s going to run about $5,000,” she said, “but it looks like we’ll be able to get that going pretty soon.”

Keilwitz, who thought she might be looking for another job before Christmas, openly admits how heartwarming the town’s gesture is. The impact shows in her eyes as she describes what they are doing for her. And what she’s doing for them is continuing to make her area-famous broasted chicken and pies for the weekly Sunday buffet, showing up to make coffee every day at 8 a.m., creating lunch specials and making sure there’s a place to meet, talk, and pass time with neighbors.

“It really is the only place to get together in Gilead,” Krueger said finishing her ritual Tuesday morning cup of coffee and added, “It’s where we find each other.”

How to Use Mulching and Avoid Overwatering in Summer Vegetable Gardens 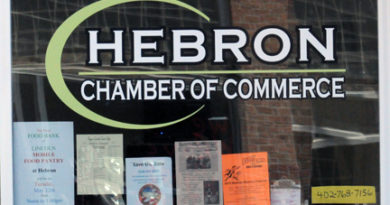