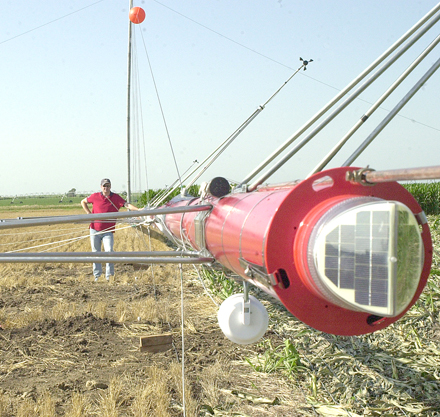 Aether Energy LLC, a grassroots group of local landowners interested in wind production, erected a meteorological tower recently just south of Highway 8, one mile east of Byron on the Andy Schmidt farm. The 196-foot tower is the second one to go up in Thayer County; the first was installed by the Aeolus group a year ago on the Bob Marsh farm along Monument Road. That group is also made up of local landowners and both groups are held together by former Thayer County resident Gary Aksamit.

The Texas energy broker who grew up in Alexandria, visits the area often, especially since he’s the idea man behind a couple of wind projects here. Aksamit began talking to county landowners three years ago to let them know what a valuable resource they were  sitting on. He also wanted them to know how to make that valuable resource work for them.

“We have a natural resource we should nurture,” he said during installation of the second tower. “Wind is the only power generation we have that has no emissions and doesn’t require water. It’s totally self-sufficient. It’s the only non-impact energy resource we have. It’s really pretty simple.”

The new project, affectionately referred to as the “Stoddard Road Project,” is similar to the Aeolus project that will run along Monument Road in the central part of Thayer County. “We are looking at installing 40-50 turbines from Byron straight east to the Stoddard Road right along the Nebraska/Kansas border,” Aksamit said. “We do not have the wind they have at Greeley, but we do not have the wildlife issues here in Thayer County either.”

Aksamit said the quality of wind and financing are not the problem with getting both projects off the ground.
“We need a buyer for our product,” he stated. “That’s the crux, that’s the hold up, and that’s where we are right now.” Without a buyer, there’s no sense in producing electricity, he said.
Aksamit said he’s been talking to potential buyers outside of Nebraska and adds that the conversations are ongoing.

As for location, Aksamit said no wind farms will go up in central Nebraska if the Game and Parks have anything to do with it. “Wildlife habitats will be affected and the Game and Parks said that isn’t going to happen,” he said. “That’s why we’re sitting in a prime situation right here in Thayer County.”

Like the first tower, mostly financed by Aksamit, the second tower will measure the amount of wind indicating how much electricity can be generated by a wind project. “Once we know that, we’ll be able to tell landowners what they can expect from a wind turbine on their property,” he said.

Both tower sites have positives  and negatives, he added. “I think we’ll see more wind in the Byron area, but we’re five miles from a power line, whereas, the Monument Road project has a power line running right through it,” he said.

Aether Energy and Aeolus Energy are limited-liability companies so named in reference to the “upper sky” and Greek god of wind. 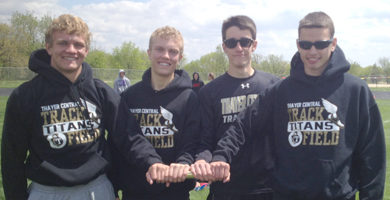