Following the search of a vehicle that turned up cocaine, marijuana, methamphetamine and components for a mobile meth lab, police officers from the York County Sheriff’s Department arrested James D. Paugh, 23, of Hebron, and Raymond (aka Charlie) Purzycki, 25, of Tennessee last month. The arrest took place near Gresham where the two men had been living.

Lt. Paul Vrbka of the Sheriff’s Department reported that earlier in the day, officers arrested an individual on theft charges regarding stolen semi batteries which eventually led to the arrests of Paugh and Purzycki.

On Tuesday morning, May 15, Paugh, who is a 2006 Thayer Central graduate, appeared in York County court where he was bound over to district court on four felony counts and one misdemeanor count.

Lt. Vrbka reported that a drug dog was used to search the vehicle, where most of the evidence was found; however, a search of the men’s residence at 230 Maude Street in Gresham also turned up paraphernalia. Lt. Vrbka told the York News-Times newspaper it appeared both men had only lived a short time in Gresham and appeared to be in the course of moving. 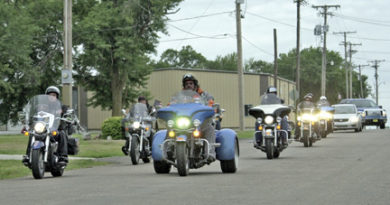 Use Caution Caring for Storm-damaged Trees