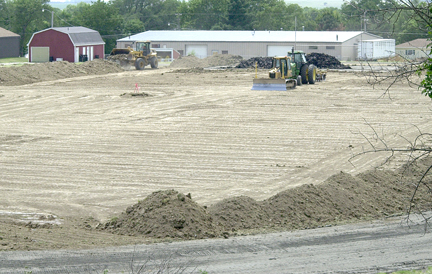 No, it won’t be done in time for the 2011 football season, but the Thayer Central Community School’s track and football field are undergoing a major renovation. The Thayer Central school board okayed the development of preliminary design for replacement of the track and football practice field in March and during a special session Monday, July 18, okayed the construction contract.

Bids for the project were opened at 2 p.m. on July 11, and reviewed at the regularly scheduled July 11 meeting.

“We saved about $160,000 going with this time line,” said Thayer Central Superintendent Drew Harris. “It will not affect the school schedule, although our biggest inconvenience will be finding a place for football practice. Games will still be played at the Hebron Sports Complex.”

Most of the money for Phase 1 will come from the building fund, Harris said. “We’ve been saving for quite some time; there hasn’t been any major upgrade to our facility in decades.”

Harris said there is approximately $750,000 in the building fund and funding from the depreciation account will most likely make up for the additional expense.

The entire project involves putting in a  new eight-lane track, irrigating the interior of the track area for an eventual football game field, restructuring the field events stations, wiring and conduit for lighting, and putting in infra-structure to facilitate other projects down the line, Harris said.

In a newsletter this Spring, the superintendent said developing issues for safety prompted the need for a new track, specifically surface cracking due to problems with the base. A drainage problem was causing water to flow beneath the surface of the track damaging the base.

“These plans complement the Thayer Central Athletic Boosters’ plans for athletic facility improvements,” Superintendent Harris said in his newsletter. “They serve as Phase I of their proposal.”

The school administration and board of education have been working in conjunction with the Athletic Boosters and details of the Booster’s proposal can be found on the school website at www.thayercentral.org. Click on the ‘Boosters’ tab at the top of the home page.

In January, the Athletic Boosters unveiled the $4.5 million facility improvement plan to interested individuals at a special meeting at the school. Since then the group of Thayer Central devotees have busied themselves raising funds.

“There is plenty of room for donations,” Harris added, “as well as naming opportunities for anyone who is interested,” meaning donors can have areas such as the shot put ring, triple jump area, bleachers or even the football field named after themselves or loved ones. The Athletic Boosters extend the naming invitation to all phases of the improvement plan.