Thayer County Museum Curator Jackie Williamson figured it was wiser to move the entire Hubbell United Methodist Episcopal Church than trying to move just the church’s stained glass window, a signature of Grand Army of the Republic and Women’s Relief Corps.
“I’ve known since at least 1976, that window was a treasure,” Williamson said. The arched window has the American Flag at the top and is divided down the middle with GAR seal on one side and WRC on the other.
She worked on the history of Thayer County churches for the country’s bicentennial and took slides of every church in the county.
“I thought, ‘That window is priceless. We have to save it,’” she said. Another stained-glass window in the church was sponsored by the Ladies Aid Society.
Williamson wanted the building after the closing service was held in January of 2002. Spirit of the Living God was one of the last hymns sung. Eldon and Mary Beth Nicholson gave the final sermon and Frances Stradley, who was over 90 years old, played the organ.
Williamson set about raising funds to move the church, but could only draw $3,000.
“We didn’t raise enough and I had to give it all back,” she said.
The museum’s file on the church goes back to the late 1800s when circuit riders rode horses to spread the gospel.
The federal Works Progress Administration put into action by President Franklin D. Roosevelt after the Great Depression sent one Clarence Struble to survey the church, which was originally located northwest of the present church. It was documented by the Hubbell Standard newspaper as organizing June 4, 1882.
The first church building was torn down in 1905. Lumber from the original building was used to construct the new church, dedicated in 1906. Sunday School records were scant with nothing found before 1910.
In raising funds for the GAR window, Sam Patten was the “moving spirit in this enterprise,” according to the Standard. Patten refused to take money from outside sources. He wanted the window to be raised exclusively by civil war veterans. Enough donations were collected to install the $150 window. Meanwhile, the Ladies Aid Society met every week to sew carpet rags and quilt in their quest to gather $125 for a window. They also held socials and suppers for funds.
After it closed, Linda Reid of Hubbell wanted to see the church preserved. She eventually sold the pews to a church in Windsor, Colo., because she knew they were going to a good home. Last week, she was emptying the church to prepare it for moving to the museum grounds.
“The church is unique in its shape,” Williamson said. “It is oddly shaped.”
Its entrance originally had two doors. The bell is still in the tower.
The museum board in preparing for the church has received the specifications for the foundation and they have nine months of liability insurance on the empty building, which gives the board nine months to move it.
The museum has received $5,000 from an anonymous donor.
The move will cost approximately $20,000 total. A foundation is needed because the church building had a basement that housed the heating system.
The church will also need a new roof and paint, Williamson said. 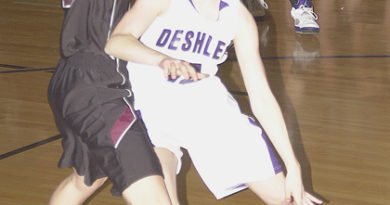