She’s ready to shake the budding tree of economic development in Thayer County and has a passion for people.

Bruning comes to the area from Phelps County, where she made strides, some of which garnered national attention, for economic development. The Phelps County Development Corporation had its own programs that pumped hundreds of thousands of dollars into downtown buildings via personal investments and PCDC matching funds.

What drew national attention was the Magic Multiplier Gift Card during Covid-19, which encouraged shoppers to purchase gift cards for local revenue. The retailers would then turn revenue data over to PCDC for a dollar-to-dollar match.

“There were no strings attached. We were just doubling the money so stores could keep their doors open,” Bruning said. The county then matched the funds again to assist nonprofits, such as a food pantry and the Court Appointed Special Advocate organization.

Bruning said they also had a digital development grant for Covid-19. The National Rural Economic Development Association took note, and PCDC received calls from other states for information. Bruning was also on statewide conference calls to explain the programs.

“We helped over a dozen communities launch their own programs,” she said.

To entice young people to return home, PCDC created a scholarship for students and adults to receive an education that had a catch — after graduation, those receiving the scholarship had to work in the community one year for every $1,000 they received in scholarship funds.

The program was launched before Bruning started at PCDC, but she took it to another level. Local employers were asked which qualified positions they needed to fill. Students sent their resumes to PCDC, and those were forwarded to local employers.

But Bruning is looking at Thayer through a different lens.

“My goal in this position is to create a strategic plan with the board and figure out what programs are needed here,” she said. “I’ll use my creativity to have some answers for this community. I want to thrive. This is where I am going to raise my family and I want to see growth.”

Entreperneurs and start-up businesses are her favorites.

“I get energy from their energy,” she said. “We want to put Thayer on the map and turn the open sign on.”

The Alliance partnered with Southeast Nebraska Development District to help find Bruning after TCEDA decided to reorganize. But it was always Bruning and her husband’s goal to land in Thayer. Adam Bruning is a native of the county and worked at the Holdrege and Kearney Bruning Bank locations.

Bruning is originally from Edison in Furnas County and a graduate of Arapahoe High School. She attended Central Christian College in Kansas for a bachelor’s degree in sports management with a focus on mass communication. The turnaround in her career came when she worked for a title company and learned the closing process.

“While I was in my role, I completed courses in economic development and received certifications,” she said.

It’s also in her personality to give back, she added.

She already has ideas to tell the Thayer County and TCEDA story to the world using the internet and social media. One of her goals is to have someone come and conduct a workshop with local businesses.

“Now more than ever, it is important to be online,” she said.

Bruning noticed she couldn’t find out a lot about the county, store hours and properties because of scant online information.

That hinders the county, she said. 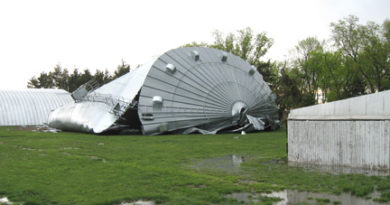 Commissioners save $62,000 on salary, benefits