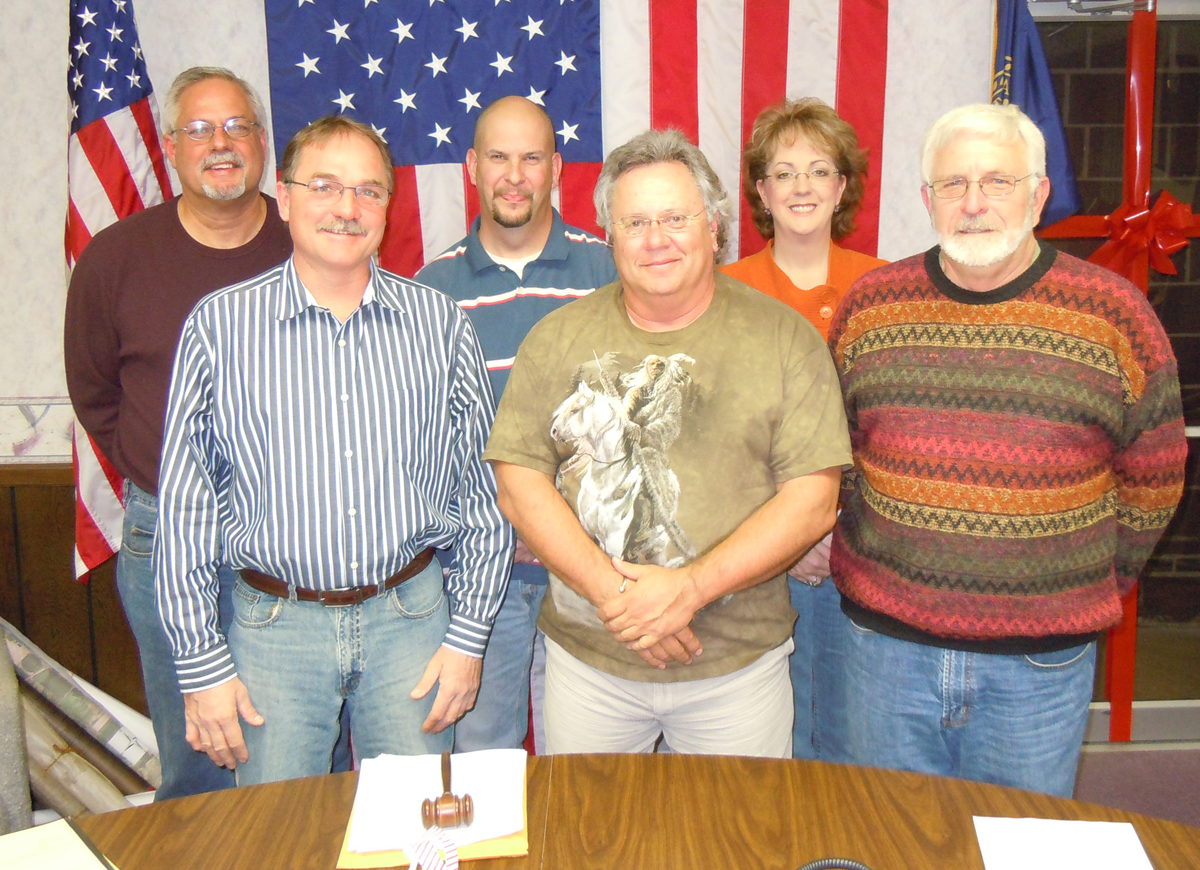 Hebron City Council leaders took the oath of office Monday night as the board made the transition from old to new. Pictured above (l-r): Back row: Ward III–Robert Dodes, Hebron Mayor Shane Day and Ward II–Beth Goldhammer. Front (l-r): Ward I–Rich Koch, Ward I–Jay Bauer, and Ward II–Larry Fangmeier. Not pictured is Ward III councilman Kurk Wiedel. Fangmeier was also installed as the Council president, a position he has held since 1998.

The Hebron City Council spent its final meeting of 2010 discussing  nuisance properties, the purchase of a new tractor and snow plow for a pickup, hiring of a building permit inspector, a sewer line project, and the leasing of a skid loader. They also received rat and dog complaints before turning the council chambers over to the new board.

Although the animal complaints were not on the agenda, the animals involved are connected to one of the nuisance properties already appearing on the council’s radar. Neighbors in the 400 block on Second Street are complaining about large rats occupying a dog cage in the back yard of 415 N. Second St., and Monday night attended the council meeting to let city leaders know about the situation. The neighbors said they feel the dogs in the cage, two German Shepherds, are starving and have taken it upon themselves to provide food and water because, as one of the neighbors stated, “It’s too hard to watch them starve, too hard to watch the situation.”

A couple of weeks ago, the female Shepherd and two pups disappeared from the cage, the neighbors said, but the male is still there. It is believed the female was placed in a separate cage at a different location in Hebron. One councilman said he thought the owner was breeding the animals. The council has received no response from the owner regarding the nuisance property. A letter was sent to him in September.

The council decided to take the next step in cleaning up the nuisance property to control the rats and will discuss with City Attorney Joe Murray their rights on the matter of animal cruelty.

In other business, the council accepted a $77,850 bid for a New Holland tractor, agreed to a five-year lease contract for a skid loader, and okayed the purchase of a new snow plow for approximately $6,000.
They also accepted a $37,000 bid on a sewer pipe project under 13th St. The pipe is leaking and needs to be fixed. The project will begin when weather permits.

Finally, the council agreed to hire Bud Ficken as the building permit inspector and passed an ordinance stating the inspector will receive $100 a month plus $25 per requested permit.

At the close of the meeting, acting mayor Larry Fangmeier passed the gavel to incoming mayor Shane Day and welcomed new councilman Robert Dodes. Mayor Day then began his term by making committee assignments which include:

The Council continued to support Larry Fangmeier as president; he has held this position since 1998.
Other appointments include clerk Jean Nagey, treasurer Carla Seaman, attorney Joe Murray of Germer, Murray and Johnson, and physician Dr. Tim Sullivan.

Prellwitz, Lyle Burd, Judy Hunt Shirley Finke and John Musgrave will sit on the planning commission board and Lucy Wegener, James Fangmeier, Stacey Bowers and Eldon Kassebaum will serve as the tree board.

Merle Hartley, Dan Jantzen, Glenn Hinz, Joyce Beck, Darcy Heitmann and Lori Werner serve on the board of economic development while Al Wilshusen, Ellen Long and Roger Virus serve as the recreation board.

Other appointments which can be viewed at the City office include the Community Center board, the Board of Health and the Cemetery board.

The designation of Depository of Funds is Thayer County Bank.