One local man was killed last Tuesday evening, Oct. 21, in an accident that occurred at the intersection of Road 6100 and Highway 81.

That evening, James Summers, 62, of Hebron, was driving a farm truck southbound on Road 6100 crossing Highway 81.

The second vehicle was a semi driving northbound on Highway 81.

Summers was struck broadside by the second vehicle.

The Thayer County Sheriff’s Office, Hebron Fire and Rescue, Nebraska State Patrol and Nebraska Department of Roads all responded to the accident.

Both vehicles were occupied by the drivers only.

The two drivers were transported to Thayer County Health Services by Hebron Rescue.

Summers was air lifted to LGH West in Lincoln but did not survive his injuries.

Another accident occurred early Wednesday morning, Oct. 29, at about 3 a.m.

Thomas Bowers, 51, of Fairbury, Nebraska, was traveling westbound on Highway 136 when he struck a cow which had been standing in the roadway near the Thayer and Jefferson County lines.

At approximately 3:05 a.m. the Thayer County Sheriff’s Office and  Hebron Fire and Rescue responded to the accident. 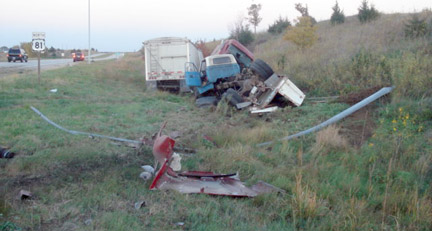 No timetable for construction on river bridge