The Lady Titans competed at the Kearney State meet last Friday on Oct. 24.

The girls took sixth place out of 17 teams with 145 points.

“I felt the girls ran very well at State. Less than one minute separated our top four runners which allowed us to score well. They ran with a team mentality,” said Andy Long, the Titan cross country coach. “The last few meets we have been running in a fairly close pack which has allowed us to score well as team. Five of our six girls bettered their time from the UNK Invite held at the end of September on the same course.”

Adam Hellbusch, the only one from the Thayer Central boys team to qualify for State, finished 49th out of 145 runners in a time of 18:42.

“This is the third top ten finish for the girls in the last three years. Last year they finished fourth and seventh two years ago,” said Long. “I am very happy for our seniors to finish on such a good note for their careers. Rachel, Haley, Trinity, and Sydney all provided great leadership throughout the year and especially at the State meet.” 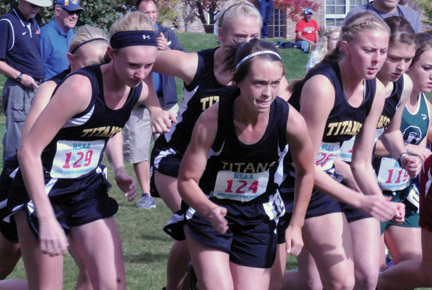