In the past week, the sheriff’s office has received reports from Hebron citizens that someone has gotten into their car and gone through their belongings. Most of the cars were reported to have been unlocked. Some report that their garage has been entered also.

According to Sheriff David Lee, the investigation into this matter is ongoing, so items that have been stolen will not be disclosed. However, the damage to the cars has been minimal. It is believed that these crimes were committed between 2 a.m. and 5 a.m.

More recently, there has been a report of the same type in Deshler.

“If you see something suspicious, try and get a detailed description of what you saw and report it to us,” Lee said.

The Thayer County Sheriff wants to remind everyone of some steps to take to make your house, car and garage more secure.

There are several things that you can do to make your car a difficult target for criminals. Lock your car, park in a well lit area and if you park in the garage lock your car. Your garage doors should remain closed so you are not advertising what you have. Be sure to utilize outside lighting. Motion lights are a criminal’s enemy. The most important thing to do is to call when you see something unusual. If you see something or hear something at three in the morning don’t wait until the next day, call when it is noticed, Lee said.

The sheriff’s office is manned 24 hours a day and 7 days a week.

Thayer Central School Board to meet 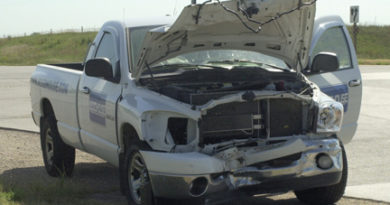