In the classic Christmas movie “Elf,” the main character explains that “the best way to spread Christmas cheer is singing loud for all to hear.”

With all the stress the holiday season brings, its spirit can easily be lost in the wrapping that still needs to get done, the travelling, the weather, the relatives you don’t want to see and so on.

Music, however, can be an excellent way to help people slow down and remember why the holiday season is so important in the first place.

“Music is a universal language,” said Tami Francik, hand bell director at Saint Peter Lutheran Church in Deshler and human resources generalist at the Thayer County Hospital. “It invokes emotions that are true with everyone. It’s very powerful.”

Carols play a large part in the Christmas season culture from secular songs such as “All I Want for Christmas is You” to sacred melodies like “God Rest Ye Merry Gentlemen.”

“There is a sense of awe mixed in with the Christmas season,” said Francik. “There’s lots of anticipation even outside the church and there’s a lot of excitement and emotions that come with anticipation.”

Francik has been a bell ringer for over 20 years.

She started in fifth grade at her home church in southern California just as an extracurricular activity but it has since grown into so much more.

“How far this has gone and taken me has completely been God,” said Francik. “I didn’t wake up one morning and decide to direct hand bells.”

When Francik attended college at Concordia University in California, she auditioned for one of four hand bell choirs and was asked to join the top performing bell choir. She began directing hand bells her junior year and after graduating, she continued to direct and taught workshops.

Now, she does solo performances for church and community groups throughout Thayer County.

Francik loves playing bells not only because it’s unique, but for the relationships she is able to build and the community she is able to bring together through her music, especially during the holidays.

“I’m a relationship person,” said Francik. “These programs are very interactive and help establish relationships with the audience. It’s a great way to connect with people just because they hear you ring and you never how you might change someone’s life or even know that you did.”

Her personal testimony to that is when she invited a friend of hers who was struggling with her faith to a concert.

After the show, her friend approached her with tears in her eyes and explained her change of heart.

“After that, her spiritual journey took a positive turn,” said Francik.

Also providing Christmas music for the community is the Sacred Chorale, started by Eldon and Joy Wolfe of Hebron.

The couple had a professional choir in California for ten years before they moved to Thayer County.

Eldon has taught music since 1964.

“I’m a musician and my wife is a musician,” said Wolfe.

The Wolfes moved to the area about two years ago and discovered that there were no choir groups around.

They decided to put a notice in the paper to start a group.

“People just started coming,” said Eldon. “Now we have 18 singers. We have singers from Davenport, Deshler and Hebron.”

The group put on several Christmas concerts: one at the end of November and two in December.

“People in the choir are excited to be singing in the group,” said Eldon. “Whatever chance they get to sing, they just love to sing.”

Eldon welcomes anyone who is interested in joining the group to Grace Lutheran Church in Hebron. The group is open to high school students and adults. 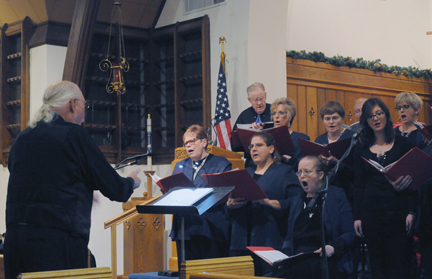 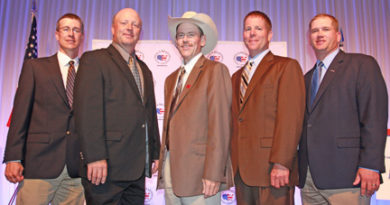