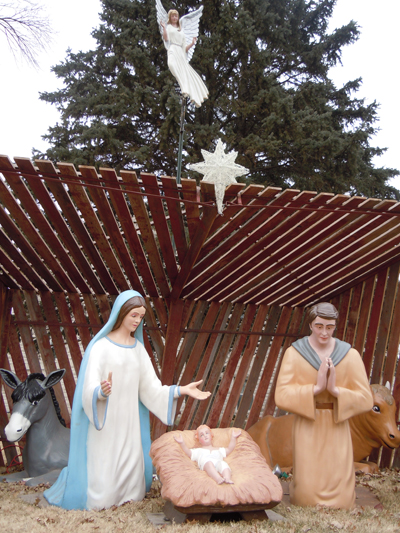 The ACLU (American Civil Liberties Union) has a problem with the Women’s Achievement Club’s Nativity setting on the courthouse lawn in Hebron. It says Thayer County’s government is sending the message that by displaying only the Nativity on public property, it is endorsing one religious belief, an endorsement made illegal 21 years ago.

In a letter to County Attorney Dan Werner, ACLU attorney Amy A. Miller states “the US Supreme Court has held that a holiday display on government property is illegal if it is solely religious, without secularnon-religious components.”

“I’m surprised we haven’t seen this before,” Werner told county commissioners last week during the regular meeting at the courthouse. “And even though the owners of the Nativity are multi-denominational, the Nativity itself represents one belief.”

The Nativity, gracing the courthouse lawn since 1959, began as a Business and Professional Women’s club project. Agnes McKenzie, a member at that time, is credited with the idea and the club held fudge fundraisers to acquire Mary, Joseph and the baby Jesus. New pieces were added whenever possible.

“When the BPW became the Women’s Achievement Club, we continued the project adding pieces when we could. I was wondering if or when we’d hear about this,” said WAC member Elaine O’Neal, indicating the ACLU’s notification.

Werner said the ACLU offered suggestions as to how to make the display legal such as adding secular non-religious items; snowmen, a sign saying “Season’s Greetings,” candy canes, etc., or suggested opening the courthouse lawn to all types of expression including the current religious display. “The courthouse has a large blow-up snowman in the entry already,” he said to the commissioners, a fact he pointed out in his response to Miller. He also said the commissioners have never denied or approved requests to display nonreligious items or other secular messages during the Advent or Christmas season, because they have never received any.

After half a century of collecting, the Nativity has stretched from the original trio (Mary, Joseph, baby Jesus) to two angels, three kings, two shepherds, three sheep, one ram, two camels, the donkey, and a cow. The life-sized fiberglass collection, costing around $1,000 for each piece, also has special lighting and a stable built in 1998 by Gene Dudgeon. The scene is displayed through the month of December.

The commission will discuss suggestions for solutions Dec. 29, its final meeting of 2010.

For the first time in over 50 years, the Women’s Achievement Club nativity gracing the courthouse lawn is under ACLU scrutiny, (see “Nativity” on the front page) and the commissioners are wondering what to do about it. How the American Civil Liberties Union became aware of the religious display on public property is unclear, but now that it is known, we need to do something about it.

In 1989, the Supreme Court passed a law stating that religious displays on public property depicting a single belief were considered unlawful. Of course, the law wasn’t the law until 30 years after WAC started its collection and display. But, there’s no “grandfathering” in this case, so the display must be changed.

In a letter to our County Attorney Dan Werner, the ACLU says other display items detracting from the single message are legal and will, in fact, make the single belief display legal; however, the commissioners weren’t too keen about that idea, because opening the lawn up to all and any ornamentation could present a very, for lack of a better word, ‘busy’ display.

A second opinion was to move the display to Roosevelt Park where other recommended items (Santa Hut, lighted animals and trees, candy cane poles) are already on display. The move would solve the situation for the county, but the commissioners felt it would be a case of dumping the problem on the City of Hebron.

I contacted WAC member Elaine O’Neal to let her know about the situation and she said WAC was meeting Monday night and would discuss it. She said since the law was passed, the club has discussed other options for display of the nativity, but as long as it was okay to put it on the courthouse lawn, they let it stay there for historical measure.

The commissioners have tabled the matter until their final meeting of the year, mostly to see if our county attorney receives a response to his letter he sent in response to the initial charge. Also, it gives them an opportunity to discuss what to do.

How important is this matter to you? Do you have an idea or a solution you’d like to share? If so, email me at hebronjrnews@windstream.net, or send a letter to Hebron Journal-Register, P.O. Box 210, Hebron, and let me know what you think. I will forward any reasonable suggestions to the commissioners, and you can keep them anonymous if you prefer. Just indicate in the email or letter your preference.

I’d hate to see a 50-year old collection put in storage because we can’t find a legal way to display it. 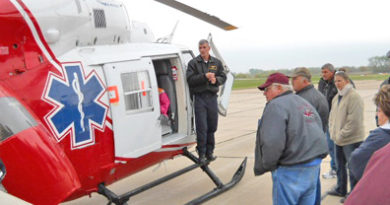 District moves ahead with design-build process