Nebraska Game and Parks Commission game warden for Thayer, Fillmore and Jefferson counties, Matt Taylor, is expecting a “big deer” harvest.
“I anticipate it, people are saying there are some big bucks,” he said. “Jefferson County has a good population.”
Quail numbers also look good. Pheasants are more plentiful than last year, but hunters will have to work at it, unlike quail.
Not a lot of people actively hunt fall turkeys, but the turkeys are starting to bunch up, Taylor added.
Taylor covers three zones and the duck season is underway in parts of his territory.
“The water quality is really good in the rainwater basins. The ducks are actively migrating,” he said.
According to a commission news release, wetland conditions have improved across the state.
“Due to cooler temperatures and increased rainfall, conditions in many Rainwater Basin wetlands have improved over the past month,” wetland program manager Ted LaGrange said. “The cooler and wetter conditions have also helped to make our pumping more effective.”
So far, Game and Parks has pumped water into 19 Rainwater Basin wildlife management areas and into four wetlands located outside of the basin.
The U.S. Fish and Wildlife Service has delivered surface water into the Funk Waterfowl Production Area, the news release stated.
Summer for Taylor was busy as it normally is. At Alexandria State Recreation Area, a new bath house was installed minus showers. New water hookups will provide for better water quality.
“I think the attendance was steady,” Taylor said about Alexandria.
Taylor has also helped out locally, with the new archery range in Hebron and proposed gun range that will be a private club run on donated land.
Grants and donations are funding the archery activity, including grants from Little Blue Natural Resources District and Rocky Mountain Elk Foundation. A grant is currently moving through the National Wild Turkey Foundation as well.
Applying for the grants was a combined effort with Jana Tietjen and Rick Souerdyke, who is a big bow hunter and member of the Rocky Mountain Elk Foundation.
Taylor said Nebraka Game and Parks is watching the grants and donations come in and may pick up expenses at the tail end of the project.
Plans for the archery range include a canoe and kayak access point to the river and a shelter.
“It is wonderful to have a great working relationship with Nebraska Game and Parks as Matt has been very instrumental in helping Hebron enhance our outdoor recreation,” Tietjen said. “He has gone above and beyond by attending city council and Little Blue NRD meetings and has also assisted volunteers in making the frameworks for the archery range.”
And, a lot of people are interested in a trap range.
“We may have a trap league as well,” Taylor said about the gun range. “We are actively searching for a place.”
Young shooters from Thayer County travel to Fairbury for meets and a trap league would let them compete in meets closer to home. 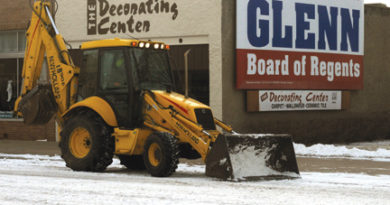