Hubbell Aurora Coop employee Tony Jacques was freed from a grain bin Monday afternoon by volunteer firefighters and first responders from Hubbell, Chester and Hebron. Running plywood boards between Jacques body and the grain, the rescuers were able to take the weight off of Jacques and extract him from the grain. The worker, who was buried to his chest, was able to remove himself from inside the grain bin and stated “I’m fine” as he wiped grain dust off of his clothing. Rescuers quickly took his vitals and checked his eyes for grain dust, then took him to a hospital for an examination. Five rescuers worked inside the bin to free Jacques including Rill Riggs and Joe Carbenneau of Chester, Dave Svoboda and Brent Mumm of Hubbell and Wayne Kugel of Hebron. Kugel said he was planting beans near Hubbell when the call came in and was the first to arrive at 1:50 p.m. According to office employee Mandy Sinn, Jacques was scooping corn inside the bin when he inadvertently sank into the grain that buried him to his chest. Above: Hubbell volunteer fireman George McLeod inspects a respirator Monday afternoon as he and other volunteers man the outside of the bin where Jacques was stuck. 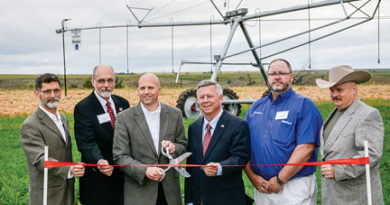 Reinke Invests in Workers of the Future