The Davenport/Edgar team repeated its Class C Area 5 championship challenge the same as last year; entering the final game 3-0 and needing only one win to snag the victory and earn a state berth in Pender. Last year, however, the squad lost two games ending the season and any chance for a trip to the state games.

Not so this year. Entering the final round exactly the same as last year; undefeated with only one win away from the championship, the No. 2-seeded Davenport/Edgar (16-4) team met No. 1-seeded Sutton (21-7) in the final battle and won the contest, 3-2. The win handed Sutton its second loss of the tournament and the Area 5 contest was over.

Sutton’s initial loss came in Game 15 of the tourney when Davenport/Edgar beat them the first time, 6-0, forcing the Sutton squad into the loser’s bracket. There, Sutton beat David City, 19-2, to face Davenport/Edgar in the championship round.

Davenport/Edgar started its winning streak against Lawrence/Nelson beating them 20-1, then beat Hebron 4-2, Sutton 6-0, and Sutton again 3-2.

There, the squad earned a win over No. 6 Overton, 8-5, Sunday night, and a win over No. 1-seed Hartington Post 4, 10-0, Monday night. The wins pitted Davenport/Edgar against the undefeated No. 2-seed Valparaiso Tuesday night. That game was played too late for publication and will be presented next week here in the Hebron Journal-Register.

The championship game is slated for 5 p.m. tonight, July 28, where winners of the Pender-DCB game and  Davenport/Edgar-Valparaiso game will face each other. 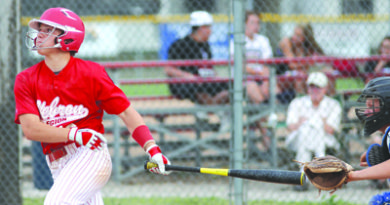