Harold Dittmer, who has done extensive research on conditions in Germany and England prior to immigration in the mid-1800’s, will present a program at the Byron Community Center Aug. 24 during the Byron Bash weekend. The program begins at 6:30 p.m.

Byron’s celebration theme this year is “German Heritage” to remember Byron’s early history as German families made their way west to farm.

“What was going on in Europe led to immigration,” Lavon Bohling said. Bohling’s heritage includes his German great-grandfather landing in the area when he was 16 to 17 years old.

“He was one of the founding fathers of the Farmers and Merchants Bank in Byron. I wish I could have known him,” Bohling said.

Grueber lived to be 65 years old. He was good friends with William Jennings Bryan.

Bohling said the immigrants learned the language, culture, customs and financial system of their new surroundings.

Dittmer’s research covers different waves of immigration based on certain factors in Europe at those times. For example, people were being encouraged to emigrate from Germany. A period of inflation later set off another wave.

“The interest is where our people came from and why,” Bohling said. “We need to be sharing that with our relatives and friends before it’s all forgotten.”

The old folks are growing older, he said. Dittmer is a high school classmate of Bohling’s, but lives in California.

“I don’t think any of us have every paid attention to what led them. For the generations that come, if we don’t preserve some of that history, it will be lost,” Bohling added.

German immigration is evident on the cemetery gravestones. Most immigrants who came to Nebraska went to Nemaha County before making the trek to Thayer because it wasn’t as hilly.

Recognizing Byron’s German Heritage will be sponsored by the Byron Community Foundation.

Layne Hoops said the program will also be an open mic session.

“Layne is the make-it-happen guy for the event in Byron,” Bohling said.

The program is encouraging those attending to bring memorabilia or old photographs. People will be welcome to share the stories of their ancestors’ journeys.

“We want to preserve that history,” Hoops said. 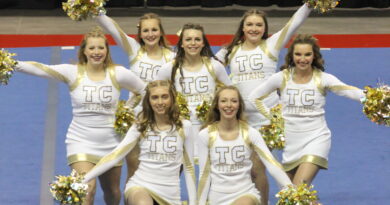