On Oct. 26, the Hebron Volunteer Fire Department dive team was asked to find weapons that were stolen from a private residence and thrown to the bottom of a canal.

The dive team was made up of assistant fire chief Justin Johnson, Rocky Deguzman and fire chief B.J. Lanton.

The three man team was called to Webster County, a mile south of Guide Rock, Nebraska.

Someone had stolen several guns and thrown them into a drainage control line off the Harlan County reservoir spillway.

The divers had to get down to the bottom of the canal and dig around with their hands and feet in one to two feet of mud.

“There was zero visibility,” said Johnson. “We couldn’t see our dive gages and it was full of garfish.”

The canal went in 15 feet deep and tapered into a three foot wide drainage tube that was 150 feet long, according to Johnson.

Lanton went in first and retrieved three guns within the first ten minutes while Deguzman acted as dive support.

However, when the sheriff sergeant checked the serial numbers on the guns, none had the numbers they were looking for.

“Two out of the three weren’t even listed as stolen for this county,” said Johnson.

Johnson then went in and brought back a fourth gun, this time with a serial number the authorities were looking for.

Lanton returned to the water to search for the last gun, even venturing far into the drainage tube. Unfortunately, the last gun could not be found.

The Hebron Fire Department has now had around 190 calls this year. 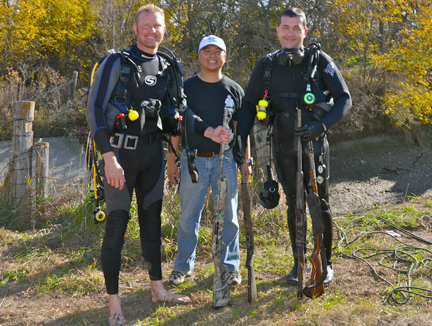 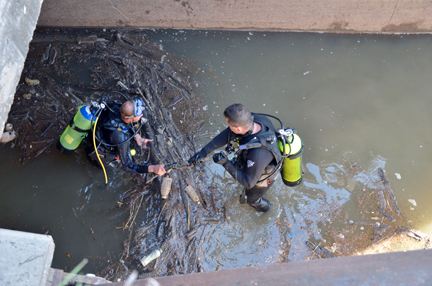