Ron Williams, owner of Williams Drilling, has been working for the past six weeks with community and family members to work on the pit surrounding the Hebron Bear at Roosevelt Park.

Workers took down the “old fish pond,” put up new block, filled it with sand, covered it with rocks and remounted the statue. The project was finished the Friday before Memorial Day.

“I’ve had lots of compliments on it,” said Williams.

Williams took on the renovations because it was a passionate subject of his late wife, Marcia, who wanted to see it fixed.

The bronze bear was purchased by and dedicated to the alumni of Hebron High School; the bear was the mascot for the school. In 1932, Coach Ed Pallett gave the Hebron High sports teams the title of the Bears. Then, while attending the Chicago World’s Fair in 1933, Pallett spoke to members of the Wisconsin Game Commission asking for a bear to be part of the Hebron scene. A short time later, Jimmy arrived by Railway Express. Pallett took Jimmy to most of the football games to draw a crowd. Opposing teams often advertised as well to have a good turnout. Jimmy was kept at the Schoubie Service Station. 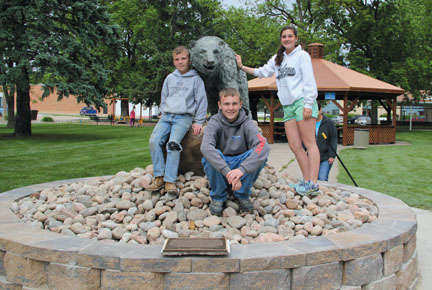