The Hebron City Council met in special session Monday night to assign a board member to the empty Ward 1 seat and come to an agreement over disputed boundaries with the owners of the old “cheese plant.”

In the first order of business, Mayor Shane Day made his appointment to the vacated Ward 1 seat. Following the election in which Jim Summers was elected to the position, Summers was forced to vacate the seat due to illness and a conflict. He is a city employee.

Mayor Day appointed Jay Bauer to the seat stating the outgoing councilman had experience on the board and had expressed a desire to continue in the position. Bauer has served on the city council for one term and was stepping down this year until Summers vacated the position. The council agreed to the appointment and Bauer took his place Monday night.

Business then turned to the Dave and Janelle Farnstrom real estate commonly known as the “cheese plant” and old “Legion Club” properties located near the Hebron Sports Complex and swimming pool.

Disputes over property boundaries have plagued both the Farnstroms and the City since the Farnstroms purchased the property in 2009. Monday night, both parties came to an agreement over who owns what and who can use what after negotiating for the better part of a year.

Cancellation of old easements and the granting of new easements as well as a couple of property exchanges outline the agreement between the two parties.

The City intends to remedy the traffic problem by extending Euclid Avenue from the swimming pool and ball park area, diagonally through a portion of land near Riverside Park to connect with the portion of Holdrege Avenue that will remain open to public access.

The extended road will force relocation of the portion of the City’s walking trail that runs along the “Legion Club” parking lot; however, per the agreement, the move is only by a few feet and will parallel the new portion of Euclid Avenue.

An expected addendum to the agreement also gives the City leeway to extend the trail from its current location, north across Holdrege and along a fence line on the Farnstrom property in order to connect the Hebron Sports Complex to Jefferson Avenue.

The board voted to accept the agreement contingent upon the addition of the trail addendum and approval from Attorney Dan Werner who has offered legal consultation in the case. 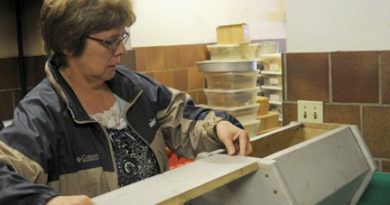