Hebron Girls Scouts have been collecting trash for over 20 years; they sort it, separate it, recycle it and in so doing, provide a significant service to the City of Hebron. City leaders recognized the importance of the service two decades ago and began paying the scouts $50 a month to keep the recycling center going. And for its efforts, the local service unit is allowed to keep the money each trailer load of material sells for.

“We work with Burton Enterprises from Henderson who pays us a stipend for our recyclables,” said the Troop 480 membership during a report to the city council earlier this month. The troop, consisting of members Megan Bulin, Rachael Fangmeier, Kelsey Long, Madison Reese, Lauren Edgecombe, Allison Tietjen, Tashia Mumm and Bryanna Dudgeon, presented a power point of information to the Hebron City Council at its regular meeting August 1. Led by Deb Fangmeier and Deb Bulin, the troop, representing the Hebron Girl Scout Service Unit, used the presentation as a request for a per-monthly raise in funding to keep the local recycling center going.

For the last trailer load in April 2011, the Unit received only $59.95, the lowest amount the Unit has ever received for recyclables. Along with the declining dollar amounts for the trash, the Scouts no longer receive any payment for No. 1 and No. 2 plastic, or tin even though they continue to collect and sort the material. The report indicated that $40 of the $50 the City pays goes to the troop who ran the center for a particular month. The troop uses the money to buy materials, attend activities, and other troop expenses.

Ten dollars from recycling is used in the general running of the local Girl Scout program including starter funds for Daisy and Brownie troops, council identification strips, product salespersons, silver and gold awards, and special events for the entire service unit. “We have had to cut funding to other projects because of lack of money,” said one of the troop’s members. “Projects such as travel expense for girls going to council activities.”

Hebron Girl Scouts are also responsible for several other community projects including the purchase of playground equipment, the Santa House, a prayer garden, school recycling, donations to Blue Valley Community Action, backpack meals, and flag collections and burning. Right now, half of the girls in Hebron who are eligible belong to Girl Scouts. As a comparison, only 12 percent belong to the organization nationwide.

The recycling center, located at Fifth Street and Holdrege Ave., is shared by both Hebron Girl Scouts and Boy Scouts. The Boy Scouts collect newspaper and cardboard.

Council members expressed appreciation to the Girl Scout troop for sharing the information about the community service they provide and authorized the monthly payment be increased from $50 to $200. 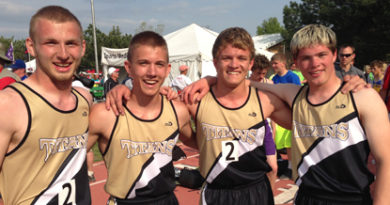 Pastures Weakened by Drought Will Require Time to Recover