In the 10th round, Hebron’s Dru Melvin claimed the top prize in Steer Wrestling with a time of 3.40 seconds.

Melvin had a successful National Finals Rodeo, placing in five of the 10 rounds, which earned him nearly $40,000 in prize money. He ended up finishing 9th in the world for the 2014 rodeo season.

“Qualifying for the NFR is an amazing experience, but having the support of my family, friends and local community means the world to me. I’ve been humbled by their support,” Dru said.

The Wrangler National Finals Rodeo (WNFR) was held in Las Vegas at the Thomas and Mack arena, December 4-13.

This is Dru’s second qualification for the WNFR, the first was in 2006. 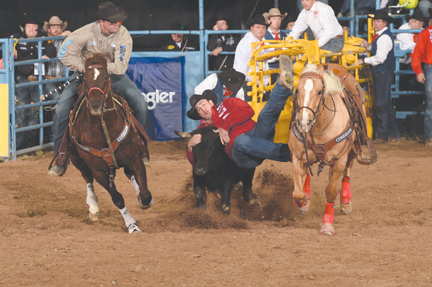 City to pitch in for river gauge