Construction of the new small animal barn at the Thayer County Fairgrounds is coming along and will be ready by fair time.

The new outdoor arena for poultry, bunnies and other small animals will be on the north end of the 24 x 80-square foot building.

The building faces north with a large cement slab as part of its facade.

Animals will be more comfortable because of the insulation. The former building, which was sold at public auction, had no water or wiring, and poor ventilation.

More outlets will also be installed.

The fair board decided the building should be replaced after discussing its needs.

Members of 4-H removed the old pens to jump-start construction, which is being overseen by Jim Hergott Construction.

Fair board members are gearing up for the annual event Aug. 8-10, which will feature carnival company, Ozark Amusements out of Missouri for the first time.

Wagner’s Carnival, the fair’s longtime contract, is a larger carnival that pairs with others to work state fairs, and is becoming more difficult to schedule.

Fourth of July plans shaping up 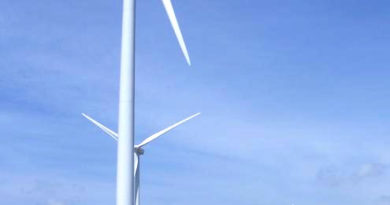 Local interest lifts to the wind