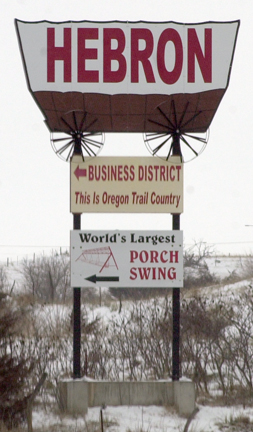 Last week it was reported in this newspaper that the Hebron sign at the intersection of Highway 81 and Lincoln Avenue may be in trouble if negotiations for leasing the land the sign sets on cannot be worked out.

It was stated in the article that the City of Hebron was not involved with the planning and erection of the sign, when in fact, according to Thayer County Visitors Committee (TCVC) representative and secretary Carol Wassenaar, the city was very much involved through the mayor at that time, Pat Kenner.

“Last week’s article was misconstrued,” Wassenaar said, “and made the TCVC look bad. We work hard to spend funds wisely for the good of the county tourism.”

Wassenaar said that the sign was promoted by Thayer County Economic Development (TCED) director at that time Arnie Ehlers who went to the TCVC for funding. “Both TCVC and TCED worked with Mayor Kenner on the design and other details,” she explained. “The TCVC paid for the sign, several thousands of dollars, and it was our understanding that the rent would be paid by the City of Hebron.”

Wassenaar added that the sign about the porch swing was added later and also handled by the City through Mayor Randall Hergott.

“We thought that the City was paying the rent,” Wassenaar stated, “until we found out recently that the money was being taken out of the TCVC treasury without our knowledge. It’s why our representative (Shari Apking) went to the commissioner’s meeting, because the money should not have been coming out of the TCVC funds.”

According to the lease agreement, a 29-year contract created by Ehlers, rent is $20 per month, or $240 each year. Payment has, since 2005, been taken out of the Visitor’s Committee fund automatically each year, said Thayer County Clerk Marie Rauner, and added that the landowner sends the bill to the TCED who in turn submits it to Rauner. She pays the bill through the TCVC account.

The lease agreement describes the tenant as simply Thayer County, and does not specify which group or committee is responsible for payment.

Following Apking’s meeting with the county officials, the commissioners agreed to pay the rent for 2011, but want to iron out the details of who exactly is responsible for the rent. Since the sign promotes Hebron, county entities are leaning toward the city as being responsible for rent although the lease agreement clearly does not name Hebron as the tenant.

“The Visitor’s Committee is responsible for many signs promoting the county’s assets such as the museum, railroad, historical buildings, and its communities. We send out brochures, make repairs at the museum and parks, promote the new train watch in Belvidere, and are helping to replace the curtains at the Chester Auditorium…the list goes on and on,” Wassenaar said. “And we intend to keep working for the good of the county for many years to come.”